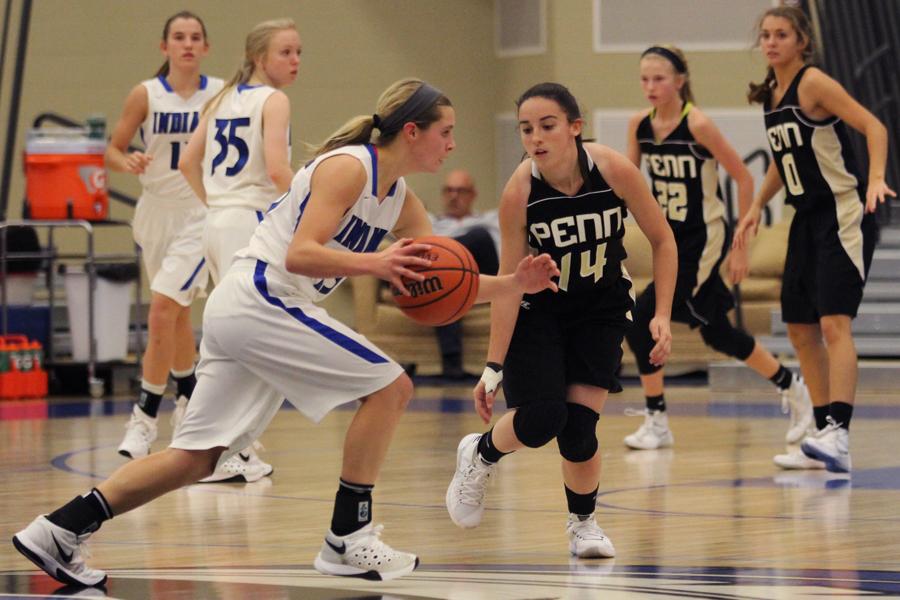 Meghan Long (9) tries to get past her opponent with the ball. Long has been playing basketball since third grade.

Q: When did you start playing basketball?

A: I started playing [basketball] in third grade by playing Bitty Ball.

Q: What made you continue to play basketball?

A: I loved the fact that it was a physical contact sport because when I was three I started gymnastics, which was just a single effort. Basketball was just a better sport, and I loved it.

Q: What’s the main difference between the middle school and high school basketball?

A: Middle school was less competitive since I was on a team that wasn’t really well-supported, and now that I’m in high school I’m on a team that has better players and coaches.

Q: How was your transition from middle school to high school basketball?

A: It [my transition] was rough at first. I had cross country, so I missed two weeks of basketball, so I was behind and I didn’t know a lot of the plays. Everyone had to help and tell me what to do.

Q: How does it feel to be a freshman on JV and Varsity basketball?

A: It feels pretty good. It’s nice, but it also has its disadvantages because I’m a freshman. I’m new to [high school basketball], so I’m still learning and sometimes the other players don’t understand that.

Q: What are the main differences between JV and Varsity?

A: Varsity has much higher expectations. You’re supposed to know more of what you’re doing since it’s mostly made up of juniors and seniors who have been playing longer. Varsity also plays against a lot tougher teams. JV is the same pace as Varsity, but it’s not as difficult.

Q: Do you prefer playing on one team more than the other?

A: Not really. It mostly depends on the game. If I do bad one game then on the other I try harder to improve myself.

Q: Do you plan on playing basketball after high school?

A: I hope to play basketball for Purdue. Playing there has been my goal since fifth grade.