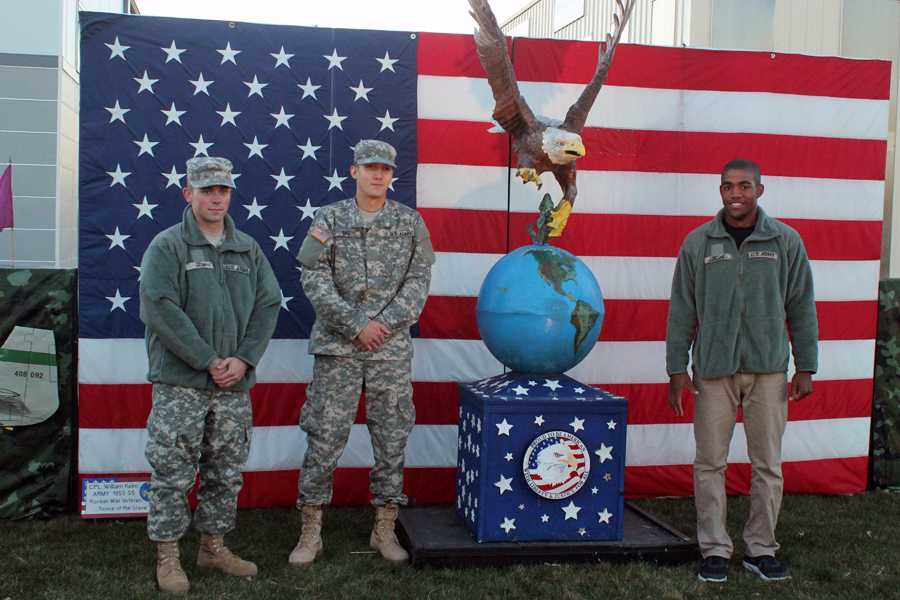 Pvt. Ryan Graf, Johnathon Rife and Alexander Jordan pose for a picture after their welcome home ceremony. The three soldiers were honored by their community after being away at Basic Combat Training in Fort Benning, Georgia.

After many months of being away at Basic Combat Training at Fort Benning, Georgia, Private Ryan Graf, Johnathon Rife and Alexander Jordan were welcomed home on Dec. 19. The Tri Town Safety Village in St. John held a ceremony to honor and welcome home the soldiers.

“I was shocked at the amount of people that showed up. There were several hundred people here, but at the flag raising ceremony more than half the people left. They didn’t come here for Santa, the train or the food. They wanted to come here for the soldiers, and they did,” Mr. Eric Graf, father of Pvt. Graf, said.

Most soldiers do not feel as if they deserve the gratitude given to them because they believe it’s their duty to serve the country, yet the community continues to support and honor them in any way they can. Over one hundred people came out on Saturday to thank the soldiers for what they have sacrificed for this country.

“I remember my son saying that he doesn’t deserve this ceremony. [However,] they all deserve this. Any soldier who has served this country deserves to be recognized and more importantly people love to recognize soldiers,” Mr. Graf said.

Many people took time out of their day to come honor the soldiers in person for what they have done. With residents of Schererville, Dyer and St. John attending the event, the soldiers received a warm welcome home.

“I wanted to come out and support the soldiers because they fight for our freedom, and with them living locally, I wanted to thank them personally,” Kuba Makowski (10) said.