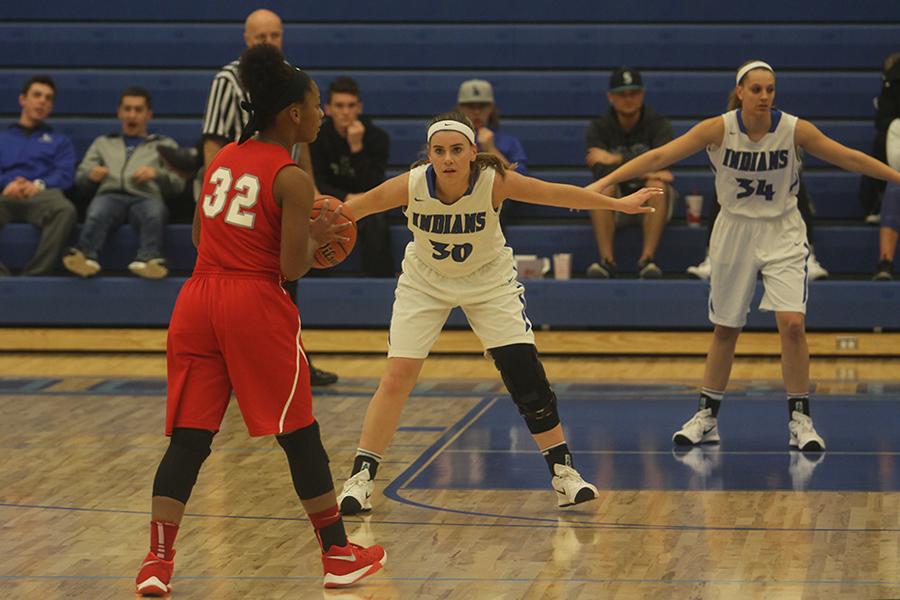 Alyssa Todd (12) locks down a Morton player. Todd shot two of 3 from the field and knocked in two free throws for a total of six points in the game.

Following an emotional Senior Night ceremony, the varsity girls basketball team defeated Morton 60-54. The Lady Indians struggled through most of the game before dominating and pulling through in the fourth quarter.

Overcoming the atmosphere set by Senior Night can be very challenging for some teams, which could be a reason for the Indians’ early struggles, but players feel there was no extra pressure.

“They are human and there is a lot involved in [getting over the Senior Night emotions]. Once we settled in and started doing what we did, we found a way to win,” Coach Urban said.

Despite the attention given to seniors, Kylie Fehrman (11) was able to give Lake Central a huge boost. Fehrman shot 4-6 for free throws, and also knocked a few big ones in the final minutes to seal a victory.

“We all practice free throws so I just pretend like it is in practice, [and I do not feel] too much pressure. Obviously it is a bigger game and we need those points, but I just try to relax and go through the motions,” Fehrman said.

The IHSAA sectional will be held at Lowell High School starting Tuesday, Feb. 2.