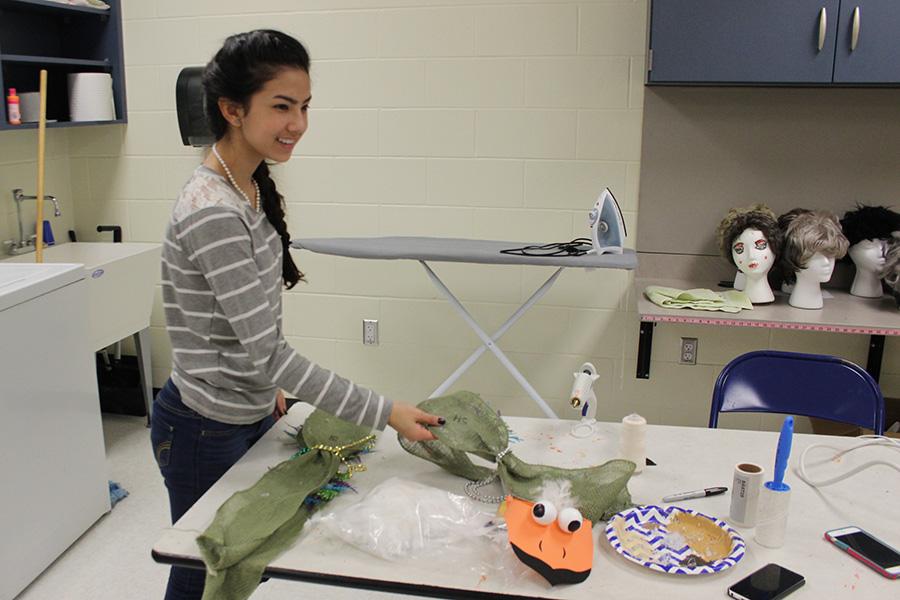 Nicole Nuzzo (9) reaches for a clamshell bra. On Feb. 17, members of the costume crew perfected costume pieces that needed retouches after the last dress rehearsal.

With musical performances quickly approaching, the costume and set construction crews held a work session on Wednesday, Feb. 17, to finish their projects before tech week. The set crew’s main projects were a boat and coral arch.

“The boat’s going to be really impressive because it’s huge, but I think once we paint it, the coral arch [will be my favorite piece],” Katherine Veronesi (11) said.

While the set crew sawed and drilled, the costume team made adjustments to a few wardrobe pieces.

“My favorite projects that I worked on were the seashell and the seahorse that are on poles. They’re kind of prop pieces, but they were fun to do because they’re kind of like pillows that light up. They’re so cute and me and my friend Nicole [Nuzzo (9)] put a lot of work into them and we painted them all nice and colorful, so that’s my favorite thing we made,” Erini Collaros (12) said.

Though all of the musical’s cast and crew members had to put in long hours and manage their time, according to Nuzzo, the benefits of working on the show outweighed the sacrifices she had to make.

“My favorite part [of being on costume crew] was getting to meet everybody and being able to be creative after being in school all day, being locked up in these rooms having to work hard. Being able to come here and have fun with everybody is just cool,” Nuzzo said.