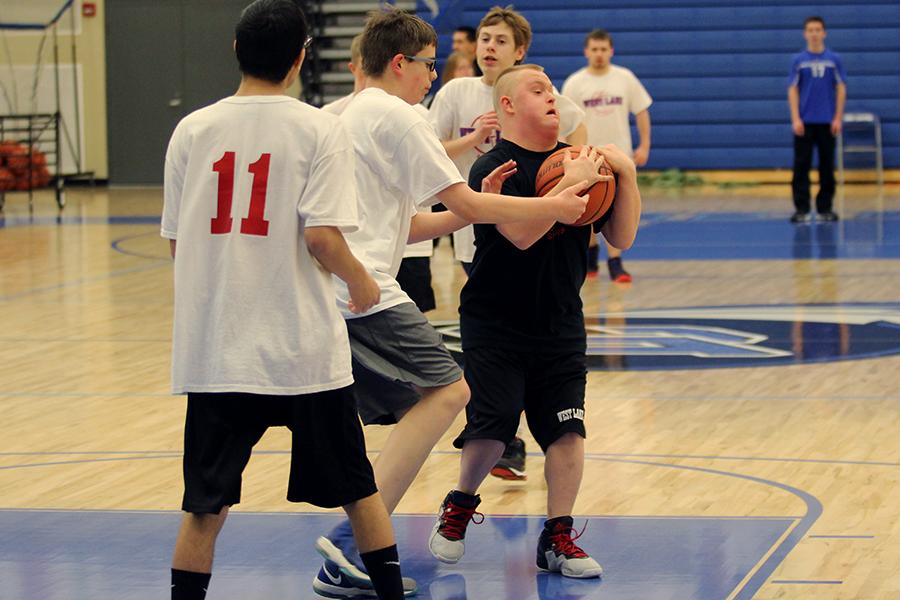 “[My favorite part about coaching] is how excited the kids get, especially when you do a big game like this where there’s fans, the band and cheerleaders. It’s exciting for them. We’ve actually never beat Mr. Powers’ team before. Last year we lost all of them, so I think the kids are extra excited about it,” Miss Brann said.

Miss Brann’s team celebrated this win as a huge accomplishment, but in the end all that mattered was how much fun they had.

“We feel proud and this [win] really means everything to us. I feel I did amazing by keeping the ball and passing to other people. We had fun,” Jacob Kiefor (12) said.

Some players from the white team were upset about the loss, but they were ready to change what they needed to for the next game.

Although the game was fun, the players know that they need to focus in practice.

“The important thing is to be there and show up for practice. That’s what matters to me,” Kiefor said.

This was a win to put in the books for the West Lake basketball team. The support of the coaches and the crowd make all of the practice worth it for the players.

“I think we did very well. We played our hearts out and I think our team never gave up through the very end. I think we played one of our best games that we’ve ever played, and I think that proves that practice [is helping],” Nick Rossi (11) said.