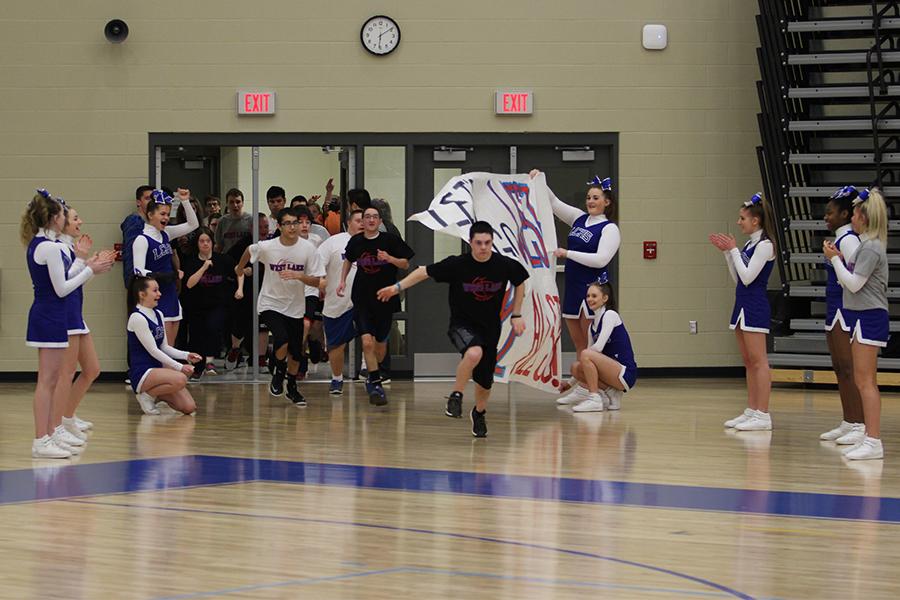 The West Lake All-Stars run out onto the field through a banner made by members of Best Buddies. The team celebrated Best Buddies Night during the game.

The West Lake All-Stars played their third game against the Crown Point Bulldogs and lost with a final score of 48-39. This game was originally scheduled to be played a week earlier, but due to school cancellation, it was played March 2.

“[Coaching] is a lot of fun. [I love] how much the kids enjoy it and how much fun they have when they’re playing. Typically Mr. [Tim] Powers, [Asst. Principal], and I have two teams, but because of the snow day, we played as one big team,” Miss. Karen Brann, West Lake, said.

This was the team’s first home game against a rival school. On  Feb. 17, the white team and black team played a scrimmage game against each other. The black team took the victory 71-35, but players love coming together and playing against other schools as one team.

“I like how we play other schools because we get to play more against different teams. [Next week we look] forward to coming out focused and ready to play Lowell,” Nicholas Rossi (11) said.

The All-Stars will play their next game against the Lowell Red Devils, who are known for having a big student section coming out to support them. This will take place on March 9.

“I think it’s going to be really tough playing on the road against Lowell because they have such a good team,” Rossi said.