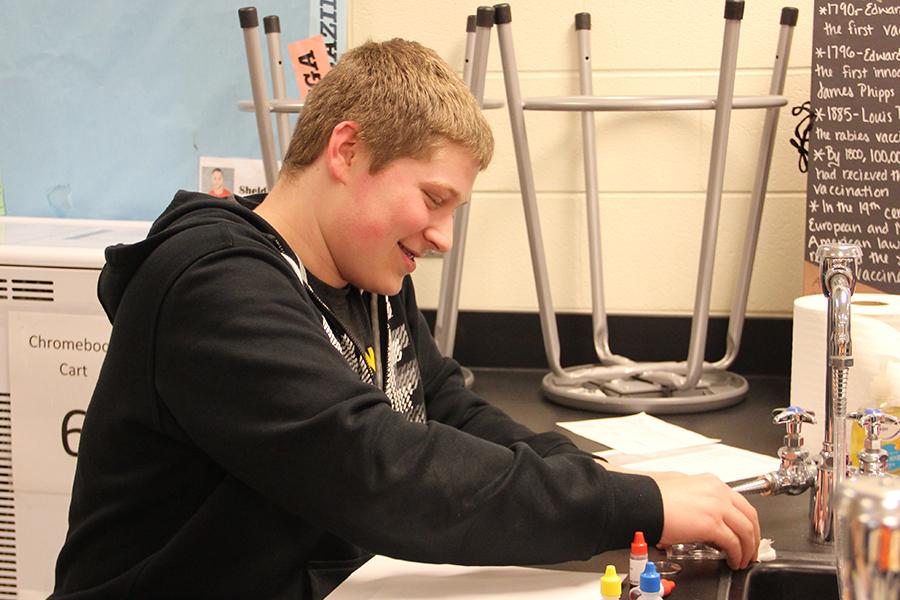 Thomas Pavell (9) sets up his lab experiment for his group. The next Science Club meeting will be held outside on April 14.

On March 30, the Science Club met in Mrs. Katelin Ellis’s, Science, room, C115. During this meeting, the students had to use genetics and blood types to figure out which of the two mystery children went to which set of parents. During this meeting, Mrs. Gabby Rapin, Science, helped instruct the lab as the resident Genetics teacher here at Lake Central.

“This lab was a lot of fun and I learned about blood, which was pretty cool. [I learned] that there are four types [of blood].  [These types are] AB, A, B and O,” Sydney Batanick (10) said.

Not only did the lab help teach the students about genetics, it also helped them improve upon their teamwork skills since this was a group lab.

“I got to work with other teammates and try [to] figure out what the blood type was of a test subject, [who was] not a real person but a pretend person,” Natasha English (10) said.

Science Club is not too much stress or work, which is what attracts some students to it.

“[My favorite part about Science Club is] there is no outside commitment. You just have to come to the meetings once a month [or] twice a month, and that’s it. There’s no extra work,” English said.

Each meeting focuses on a new topic in science so all the students get to explore topics they enjoy.

“My favorite lab we did, we had liquid nitrogen and that basically freezes things. It’s a liquid, but then it turns into a gas as soon as it’s out in the air so you have to keep it in this container. Then, they put stuff in the liquid and then it freezes. Then, we got to smash whatever it froze,” English said.

The next meeting will be held outside on April 14, so participants are reminded to wear shoes they do not mind getting dirty. On April 28, the students will get to bring in their Science Club shirts or their own white shirts or socks and tie dye them as a lab.