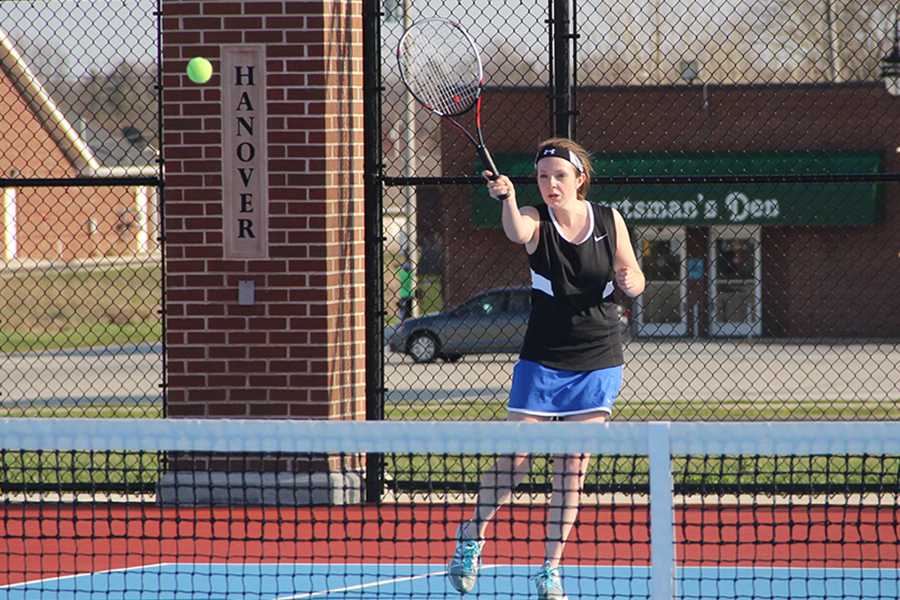 Holly Pasko (10) strides to return the ball to a Hanover opponent. The game was at Hanover Central.

“The match went very well yesterday. Hanover had a good team and had good matches at two singles, one doubles and two doubles. However, we pulled off a 5-0 win, ” Ms. Katelin Ellis, Science, said.

As Lake Central’s third meet in the season, the opposing teams were a tough opponent to beat.

“Compared to the teams we had faced before, [Hanover provided] really good competition,” Skylar Martens (11) said.

Girls on the team cannot really expect a certain player to play against. The players have to expect the unexpected.

“I think Hanover was a lot better than what we were expecting. We pulled through and it was a good match overall,” Kristina Tinsley (11) said.

The match was a victory for the Lady Indians leaving a great accomplishment for so early in the season. The next game will be on Friday, April 15, at home.

“Our goal is to win Sectionals. We definitely think we can make that goal this year, and we’re hoping to go as far as we can,” Lauren Gronek (11) said.