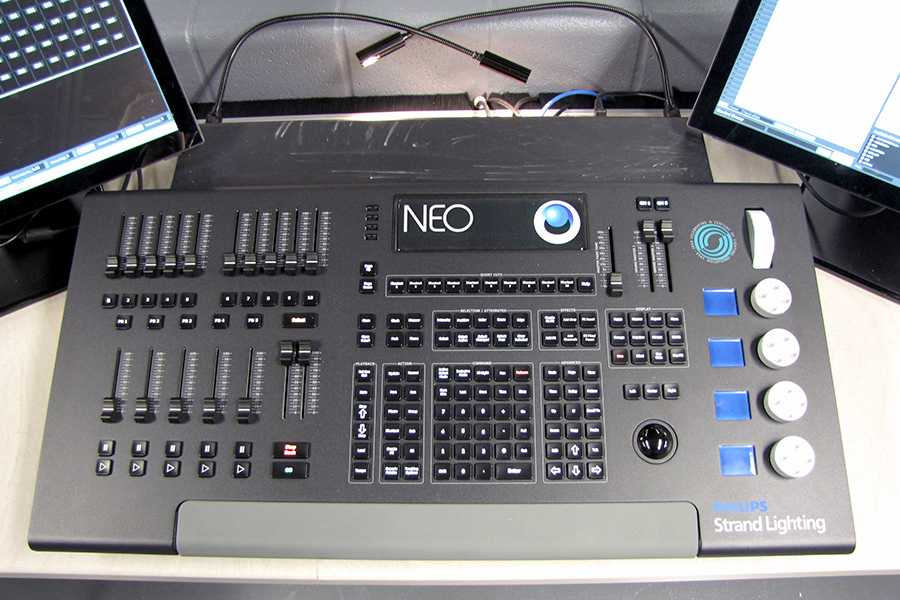 Operating the lighting board will be a skill taught in Theater Production Managment. Mrs. Pam Neth, English, planned for two classes next year.

Seeing a performer on stage as they capture the attention of a full audience is only a small part of what goes into creating a live theater production. Even though the show could not go on without the cast, the crew members are the ones who put together the whole picture the audience gets to see, working tirelessly to create the lighting, sound and set.  Next year, students have the opportunity to learn the aspects of technical theater in a new class: Theater Production Management, taught by Mrs. Pamela Neth, English.

“[The class is] mostly going to cover the operation of the equipment, but not so much design. It will cover lighting board operations, lighting instruments, sound board operations, equipment that goes along with that, the rigging system with the scenery and lighting batons that come up and down and even working the ticketing system. House management and safety and security will be part of our job [as well], including how you open up and also how you lock down and make sure everything is secure,” Mrs. Neth said.

Assistant Superintendent Al Gandolfi had the idea to create this class to have trained student workers on the equipment in the auditorium. The comparison was made to the lifeguarding class, where students are trained and then hired to work at the pool. With this being the first year of the class, many students may not have the means to get information about it.

“The last time I checked, there were about twenty people signed up, so I hope that’s two separate classes. It would be nice if it was ten and ten because twenty people is a lot to train at one time. I think it might be small the first year because people [tend to] shy away from the technical end of [theater], but I think that word of mouth will [cause it to] catch on,” Mrs. Neth said.

Students who were involved in the musical this year were the only ones who have used the new equipment. There is hope that this class will urge more people to get involved with the technical aspects of theater in the years to come.

Since Mrs. Neth teaches the other theater classes as well as the new production managment class, the acting and technical aspects will go hand in hand.