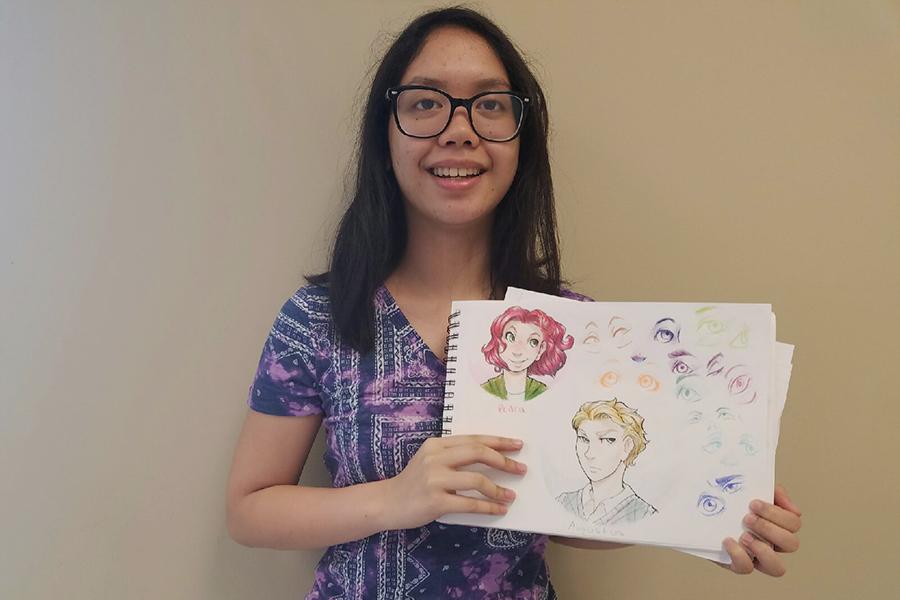 Q: How many years have you been drawing?

A: I’ve been drawing for a long time, so I may not recall exactly when it began. I was five years old when my aunt complimented me about my turtle sculpture that I did. From then on, I decided that I wanted to become an artist. It’s plenty of work, and I’m still improving.

Q: What inspired you to draw?

A: What inspired me to draw was cartoons shows such as “Samurai Jack” or “Powerpuff Girls” that amazed me as a kid. I always wondered how these groups of artists managed to bring their characters to life in just a few frames of drawing. It was magic to me. I believed that if I practiced all day I would be able to reach that point of skill and finesse that these animators were able to do.

Q: Have you won any awards? And if so, what are they and when did you get them?

A: The first award I remember getting was in sixth grade. Our social studies teacher offered poster contests in order to get everyone involved in history. I kept winning to the point that there was adjustments made for a second winner. A more recent one that I have earned was in my sophomore year. It was a state contest in language that strived to promote involvement of a second language. I won first place for the state of Indiana. An even more recent one that I’ve entered is the Congressional Art Contest; it celebrates Indiana’s Bicentennial. I painted a picture of William Henry Harrison to represent for Indiana. I’m still anticipating their results from the House of Representatives. They have recently sent an invitation asking for my presence in the announcements.

Q: Does drawing coincide with what you want to do with your career choice?

A: I do want to be an animator as my last and final career. However, I will take a more stable job first before I jump into conclusions. When I do start my animation career, my end goal is a job at both Pixar and Dreamworks.

Q: What type of art do you draw?

A: The style that I take is an illustrative technique in drawing. I prefer to make my characters alive and more expressive in their emotions. The art I had created is inspired by a semi-realistic Disney style. I seldom do organic lines to create flow in the art.

Q: Do you feel that you will continue to draw after high school?

A: I’m actually making a coloring book to sell in my college years. I do intend to continue to draw in order to keep up with the momentum of improvement.

Q: What separates you from other artists?

A: I love stories. I write, draw and even make music based on a story I have made. There are several projects that I’m working on and all reduce around a story that surrounds a character. A piece of art is not [complete] without the story it comes with. I wish to draw another world from just one picture.

Q: Have you worked on anything more besides your comics?

A: Of course. I study constructive anatomy and commissions from informal clients. I have plenty of work to do even on the weekends.

Q:If you could give any advice to an artist who wants to pursue an art career, what would it be?

A: Even if art is seen as an “unsafe” path to take, work around it. Would you [rather] fail in a job you hate or in a job you love? I chose the latter because it provides room for improvement I want. However, do be careful with choices based on career. Art may be a job that we dream to accomplish, but that does not mean you should risk everything in it. The creative industry is a competitive industry. Make sure you have something to fall back on if you want a career in art.