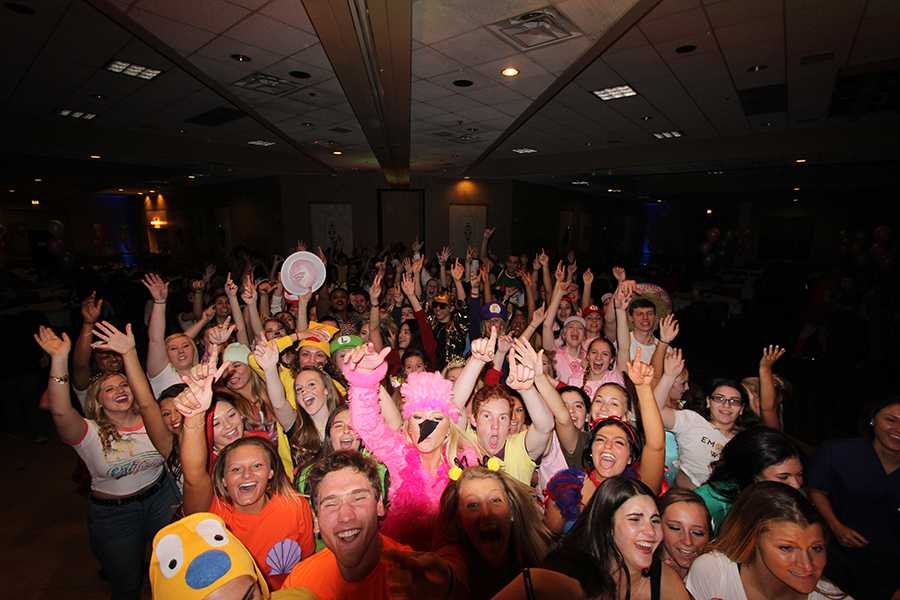 The class of 2016 celebrates at Senior Banquet on Friday, April 15. All the students dressed up in costumes with their friends. Photo by: Stefan Krajisnik.

Senior Banquet was filled with different characters from a wide range of various spectrums. Many students went in groups, and based their costumes off  the people in the group.

“Our group was me, Emma Pellegrini (12) and Emily Burvan (12). We were [from] Mean Girls. I was Kady because we kind of have the same hair color and it worked out well,” Elizabeth Ayersman (12) said.

Opposed to other schools, Lake Central’s Senior Banquet has strayed away from formal attire and taken up a new tradition of creative costumes.

“I think that the costumes are way more creative. It’s fun to dress up and put on a formal dress, but how often do you get to dress up as a WWF wrestler or a Sandlot character? It’s a lot more fun,” Sydney Halfeldt (12) said.

Some of the senior students went shopping for their costumes and others made them.

“We made [our costumes]. We sewed them. We kind of found different things around stores and put them together,” Casey Conner (12) said.

One of the awards available for seniors to win was best group costume. The WWF group won this award.

“I was excited [when we won best group costume]. I wasn’t sure if people would actually understand what our group was, but I guess enough people did to get us to win,” Timothy Matthews (12) said.

After the dance some of the seniors had some tips for future seniors concerning their costumes.

“Be creative with it. Be funny. Stand out. Don’t do something basic. Just be something really funny or something you’re interested in. It makes it more interesting,” Halfeldt said.