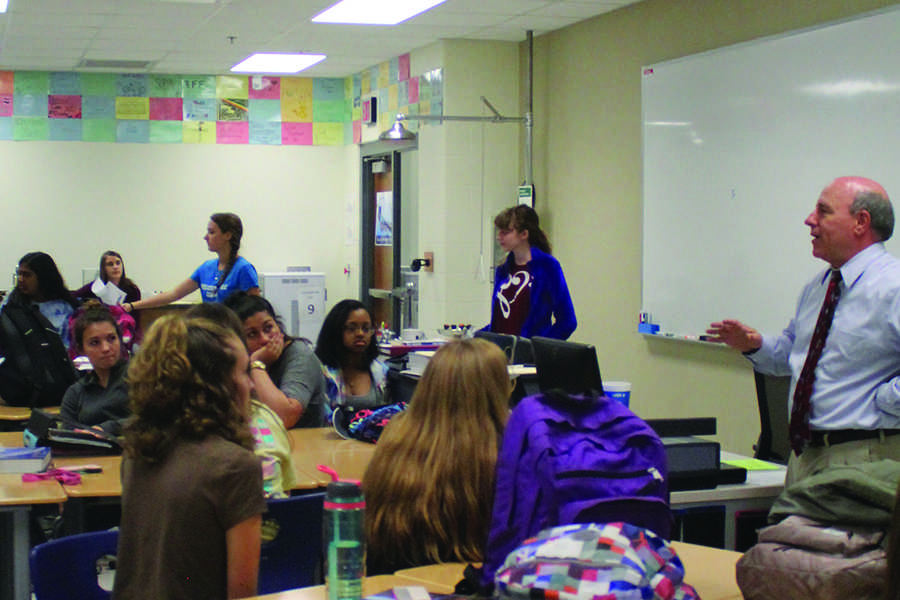 Mr. Smith explains to the group that this club is a low maintenance club. The group will try to work around the member’s schedules so you don’t have to work around its.

It was a great turn out for the Women in Science and Engineering club, also known as WISE, when they held their call out meeting on Aug. 24 in Mr. Kendall Smith’s, Science,  room after school. The meeting was supposed to inform the group on what is happening this year,and where the club was heading.

“We have a pharmacy student coming in this year. We also have past LC students come in a lot and have them tell us about themselves and what they are doing. We try to get people from all the fields [of science] to come in,” Nicole Geer (12), one of the leaders of WISE said.

“Science days were really fun last year. We got to see our old teachers and teach kids about science,” Safia Mohiuddin (10) said.

WISE not only takes trips to the middle schools, but they also go on other field trips throughout the school year.

“We will probably go to the BP Oil Refinery and possibly the wind farm this year. It all depends on if the other girls [in the club] have ideas or connections,” Rachel Kozel (12) explained.

Kozel and Geer are preparing for a growing group this year, as word about the club begins to spread around the school.

“It is just a good group to join. It’s not only a good environment, but it’s a good group of people that are all driven and want the same thing. It’s just a good place to get some advice and expose yourself to new experiences,” Geer said.