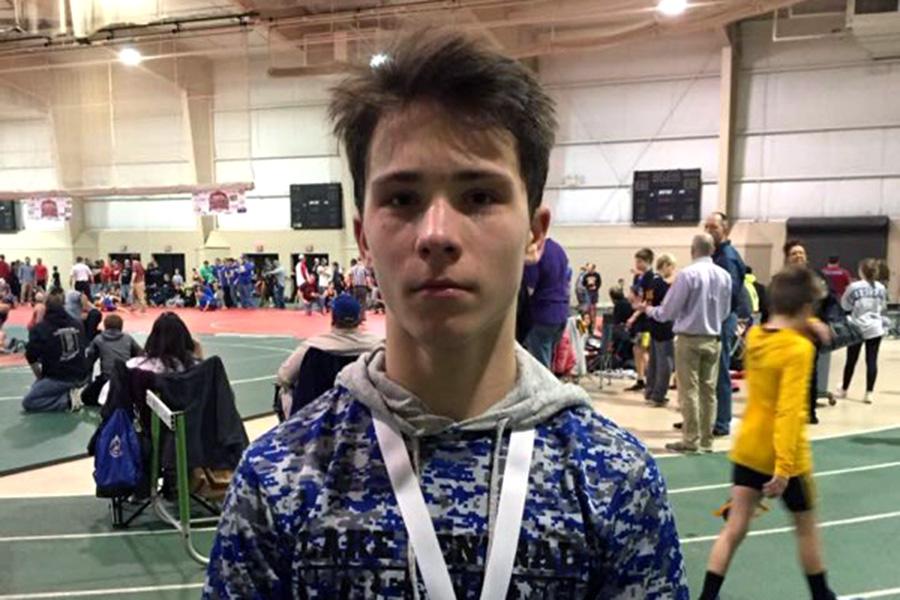 Jacob Rocca (10) poses with his medal after a wrestling match. He earned a third place medal off season over the summer. Photo submitted by Jacob Rocca

Q:  When did you start wrestling and why?

A:  I started wrestling in third grade because a friend suggested that I should join.

Q:  How often do you practice during the week?

A:  I practice six days a week for two and a half to three hours.

Q:  What do you enjoy most about wrestling?

A:  Most of all, I enjoy getting my hand raised after a hard match.

Q:  What positive impact does your coach have on the team?

A:  Our coach makes the team work harder than we want to, driving us to greatness.

Q:  Do you have a favorite experience on or off season?

A:  My favorite experience so far is placing eighth at the freestyle state wrestling tournament.  Freestyle is one of the three types of wrestling styles. It deals with rolling and throwing people.

Q:  What do you do in the off season to stay in shape?

A:  In the off season, I attend wrestling academies and camps, in addition to working out at my

Q:  What is the hardest thing about wrestling?

A:  Having the physical endurance and strength to outmatch your opponents for six minutes is one of the hardest things. Off the mats, cutting weight is also difficult. Some of my tactics for cutting weight are running, pouring sweat and eating healthily.

Q:  Do you have a favorite wrestling move?

A:  I do not have a favorite move. I will use whatever is most effective; a good wrestler does not stick to a few moves, but knows them all and how to utilize them. Folkstyle is the style used at school, so I wrestle primarily in that style.

Q:  What is the fastest you have ever pinned someone?

A:  The fastest I have succeeded in pinning someone is 20 seconds.

Q: Do you have a specific wrestler that you look up to?

A:  I admire Jake Kleimola, who was state champion last year and got awarded a scholarship at Indiana University.