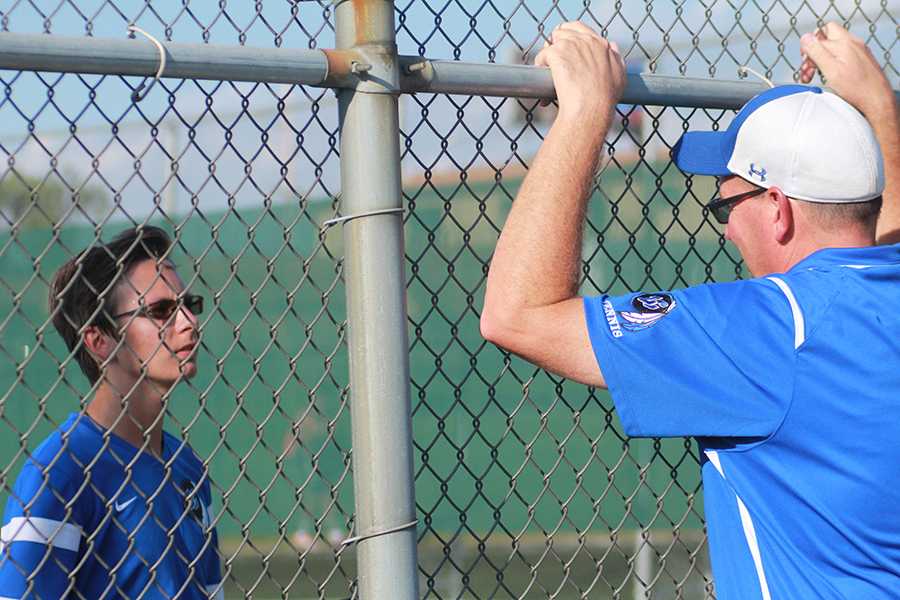 Coach Ralph Holden, Social Studies, talks to Steven Tulsiak (11) during his match. The varsity boys lost with a score of 4-1.

The boys tennis team took on the Valparaiso Vikings on Sept. 6. The team fought hard but lost 1-4.

The sounds of squeaking shoes, the pop of the sweet spot and enthusiastic fans were all heard at the match. An exciting match on the doubles court drew the audience in. The varsity duo of Keith Crawford (12) and Ricky Larson (12) was the only position to claim the win. Every point mattered, helping them to win the match 6-2 6-2. Although the team as whole lost, the two doubles teams put on a great fight. All three singles positions strived, but the Vikings were too great of a match for them.

“We competed better tonight than we did against Chesterton last Thursday, so I was happy with that. We got good play from one of our doubles teams, and our two doubles [position] played okay. [Valparaiso] was just better than us at singles,” Coach Ralph Holden, Social Studies, said.

“I think [Ricky Larson (12) and I’s] communication and our chemistry [on the court] really helps us to get these wins,’ Keith Crawford (12) said.

The boys will face LaPorte on Tuesday Sept. 13 at Michigan City.