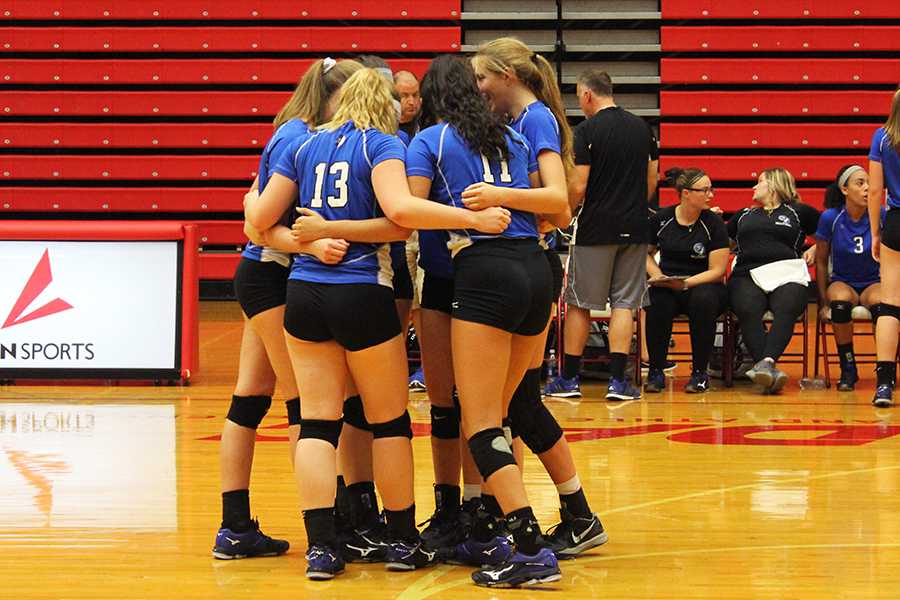 The girls embraced each other before they started their first set. They are very hard-working and dedicated players, but ended the first set with a score of 14-25.

The volleyball team fought through four matches against Crown Point on Sept. 22, taking a win in one out of the four sets.

“We had some moments of brilliance, and a couple sets were non-competitive. We need to focus on what we did in set three and carry that through the rest of the season,” Coach Tina Tinberg said.

The win in set three gave the girls confidence in how well they play together.

“We let each other know what we need to do to win a game, and I feel like we’re all super close. It helps a lot,” Taylor Marten (10) said.

This season has been a little rough for the team since they lost many of the seniors that played. The team wants to make sure to show how well they are doing without the players they lost.

“We say that we want to upset people because we lost so many seniors, and now we’re the underdogs, so we want to show people that we can come back from that,” Hope Huenecke (10) said.

Even during the matches, plans were being set on how to continue strong into post-season and prepare for Sectionals against Lowell and Munster.

“[We want to get to] Sectionals, and [we want to] just keep getting better. Even if it’s not winning games, just to improve as a team and individually,” Marten said.

The girls have fought hard during this season, and made sure they have left an impression on the people around them as well as themselves.

“A lot of times we say that even if we lose, we can learn from it. So, I think it was good that we were able to come back in the third match. But, I think the final match is going to teach us to keep pushing and to stay aggressive constantly,” Huenecke said.