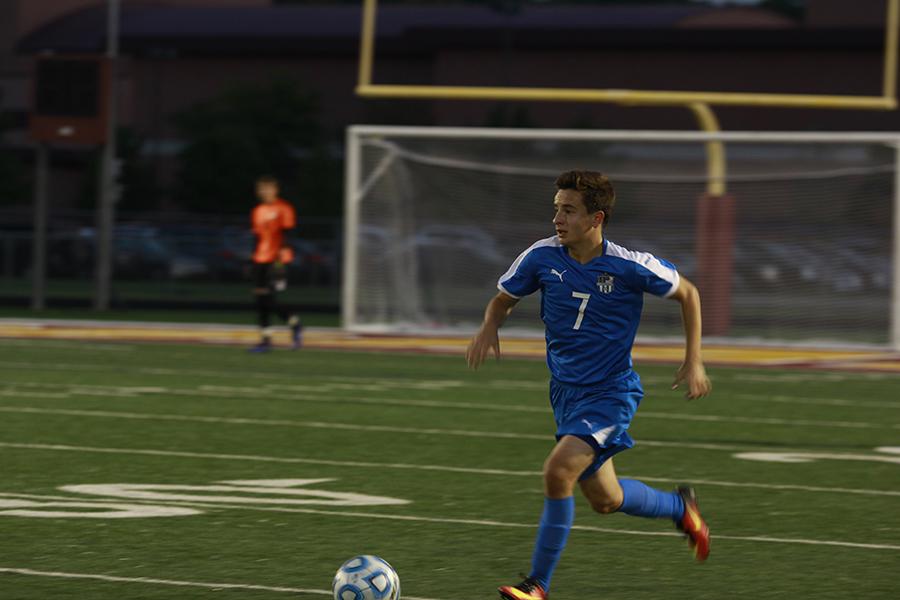 Diego Ruiz-Avila (12) dribbles the ball down the field. He looked to make a pass to a fellow teammate.

With only three games left in the Duneland Athletic Conference for the varsity boys soccer team, the Indians were hoping to achieve another victory against their second place rivals, the Chesterton Trojans, on Wednesday, Sept. 14.

The game began with a shaky start, but the Trojans managed to score their first point just 10 minutes into the game. Toward the middle of the first half, Chesterton was given a penalty kick. However, quick reaction by Noah Osearo (11) stopped the Trojans from scoring.

“I was pretty confident of getting the save.” Osearo said.

The Indians fired back late in the first half with Naser Taharwah (12) scoring and tieing the game 1-1.

“The first goal we were down one to zero, and we kind of needed [the goal] to put the team back in,” Taharwah (12) said.

Going into halftime with the game tied, the Indians had to prepare themselves for a long and physical second half. For the majority of the second half, the game was quiet until Chris Baranowski (12) was granted a penalty kick inside the goal box, allowing the Indians to take the lead.

“After scoring it was great to [be in the lead]. We were tied and made it 2-1, but [the goal] was fully deserved,” Baranowski said.

As the game went on, the players became more and more physical. Towards the end of the game, Picioski went down and was walked off the field due to cramping in his upper thigh .  Minutes later, Taharwah scored again for the Indians, making the score 3-1.

“Because of the second goal, we were up already 2-1, but it was the safety goal. Whatever happened, we were still up,” Taharwah said.

In the end the Indians went on to defeat the Trojans, winning 3-1 and giving them yet another victory. The boys hope to finish their season on a high note and get one last win before the play-offs.

“We will go over our regular game plan and prepare for next week. It will be fun,” Picioski said.