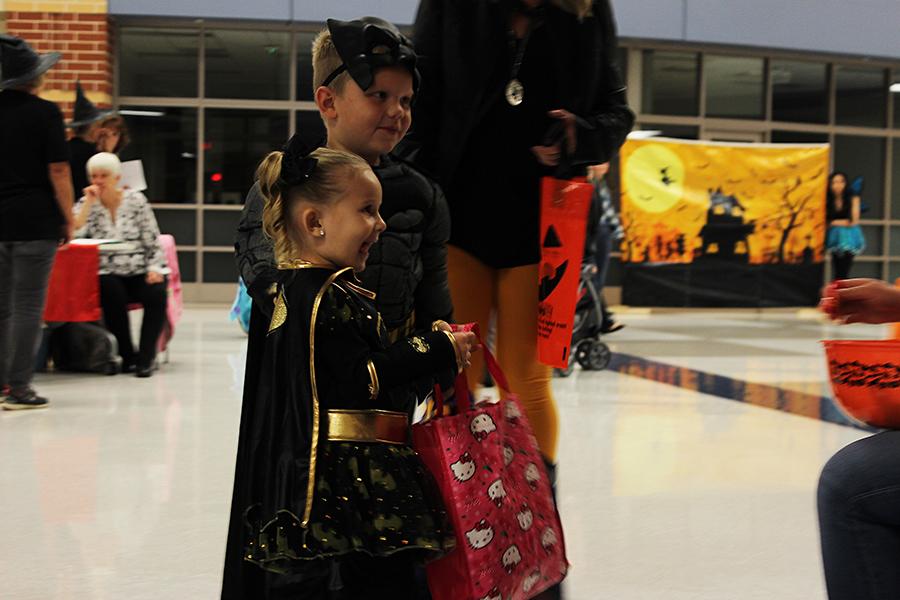 Two young children, dressed as Batman and Batgirl, smile at a student’s costume. Ghouls at the School started at 5 p.m. and ended at 8 p.m.

Ghouls at the School was a fundraiser held in the main gym on Wednesday, Oct. 26. The event was hosted by the Dollars for Scholars and Academic Honors clubs.

“Both of our clubs hand out scholarships at the end of the year, so all of the money we make tonight will be going [toward] scholarships.” Mrs. Ashley Kline, Guidance, said.

The club members are required to serve a certain amount of service hours to receive scholarship money. This event was a perfect opportunity for them to get a few hours under their belts.

“[Our] student volunteers are handing out candy, working the check-in table, running the games and helping with the costume contest. We also have six face painting tables,” Mrs. Kline said.

Since Ghouls at the School has never been held at Lake Central, none of the staff knew how many children to expect.

“We expected about 1,000 kids, and I think that we definitely hit that mark. We had 13,000 pieces of candy donated, and we are almost out. It’s been just over an hour, and we still have two more to go,” Mrs. Kline said.

This event was a success and very enjoyable for all of the young students who attended.

“I had [lots] of fun. [My favorite parts] were getting the candy, playing ping pong and bowling,” Vivian Kelly (1), a Watson student, said.