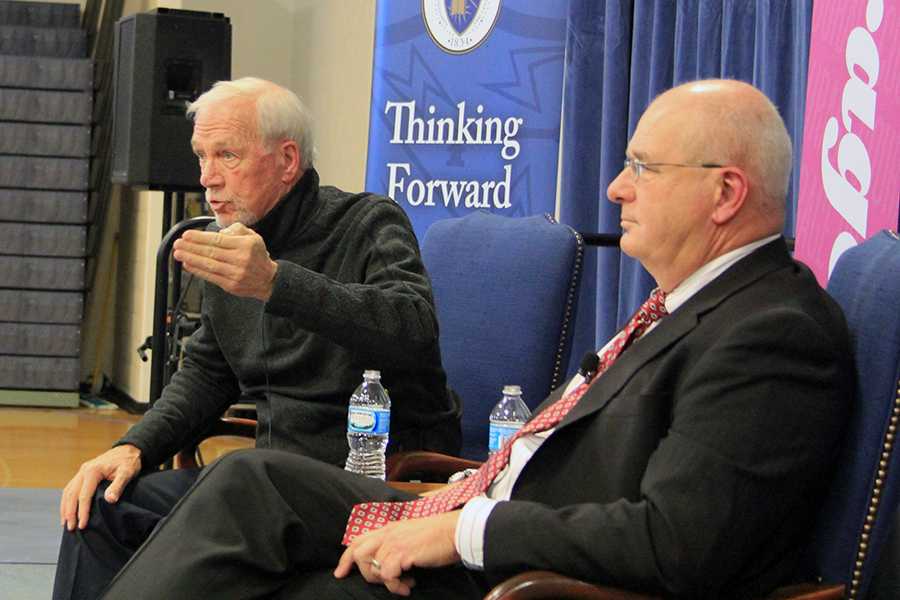 Walter Robinson talks with John Krull,host of NPR/WFYI radio program, about the movie “Spotlight”. The movie was about the manager of the Spotlight investigative team and their award winning story.

“We started off the trip by leaving the school first hour, then we drove down to Franklin, Ind., where we visited Franklin College for the Indiana Journalism convention where numerous students and our Quiver and Scout got awards. It felt really good because we put in a lot of work last year, so to see it pay off at the convention was cool to see. Then we went to the national convention in Indianapolis. Overall the three days that we were there were really fun,” Stefan Krajisnik (12) said.

Upon arrival, the staff members listened to a radio station interview with journalist Walter Robbie Robinson. The show was broadcasted live at Franklin College with roughly 500 journalism students in the audience.  Robinson addressed the movie “Spotlight” where his story as an editor  was told. Students asked Robinson questions about subject sensitivity, interviewing tips, and his first hand experience with professional journalism.

“I learned from [Robinson] that a lot more happened that we didn’t know about in the movie because it is hard to pack in months of research into a two hour movie. He showed us the dedication his journalists had to put in and what it requires to get all of the information to produce a controversial story,” Lauren Wisniewski (11) said.

Throughout the weekend, the students listened to many different speakers who helped them grow both journalistically and personally.

“Throughout my Publications career I have been to almost every convention, but this one especially taught me more life skills and journalism skills than any other one I have attended. I had the opportunity to attend sessions ranging from female journalist empowerment to leadership. These conventions not only help me to grow as a designer on my staff, but also as a person. I’m so thankful that I’ve had the opportunity to attend conventions like these throughout my time on staff,” Victoria Wilkes (12) said.

The Scout magazine was entered into a contest which won seventh place and best of show.