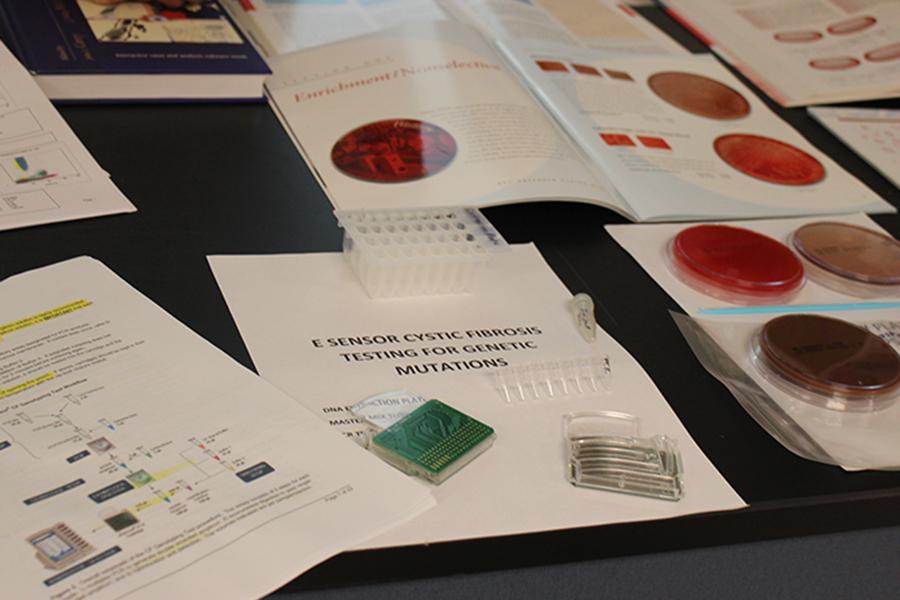 Clinical laboratory science related materials are presented to the Science Club. The members learned about a possible science career in this meeting.

Science Club started off November by celebrating a large success. The academic club, which is sponsored by Mrs. Kaitlyn Ellis, Science, met on Thursday, Nov. 3 and discussed the triumph of the Science Camp they organized. The Science Camp featured Science Club members as the counselors to elementary school students, who attended the camp for a scientific experience. The counselors ran a rotation of labs for the elementary school attendees.

“Success of science camp was mainly due to the high schoolers who ran each lab,” Mrs. Ellis said. “The high school club members did an outstanding job of teaching the science behind each lab as well as sharing their enthusiasm with the campers.”

The club made a total of $1,515. As a result of its success, Mrs. Ellis alluded to the possibility of another science camp in the spring.

“There is a possibility of another science camp in the spring, sometime in April, for those campers that were unable to sign-up for the first camp. The spring camp would be identical in the labs conducted and how the camp was ran in October. The high school club members would lead each lab, but I would be the sponsor of the camp,” Mrs. Ellis said.

Although Mrs. Ellis will be sponsoring Science Club activities by spring, the club may have to be managed by someone else until then.

“Due to my maternity leave from December to February, I am unable to continue Science Club, unless another teacher or club member runs each meeting.  A few students have offered to take over the club and lead/plan the labs. Mr. Smith would be the temporary sponsor for the club during that time, and the club meetings would be held in his room. However, I have not heard any updates from these students who have volunteered to take over the club since September,” Mrs. Ellis said.

The club is very much active in the present, however. The latter half of the meeting consisted of a presentation by guest speaker. Mary Beth Banaszak, a medical technologist, gave a presentation on careers in clinical laboratory science. She explained to Science Club that a medical technologist, or a clinical laboratory scientist, is an allied health professional that analyzes and tests body fluids and tissues. Banaszak also described the career, providing the students with information such as the job outlook and growth.

“According to the Bureau of Labor Statistics, the outlook and growth potential for clinical laboratory scientists is exceptional,” Mary Beth Banaszak said.

Within this meeting, Science Club members got introduced to potential Science Club opportunities and they found out about career possibilities for even further in the future.