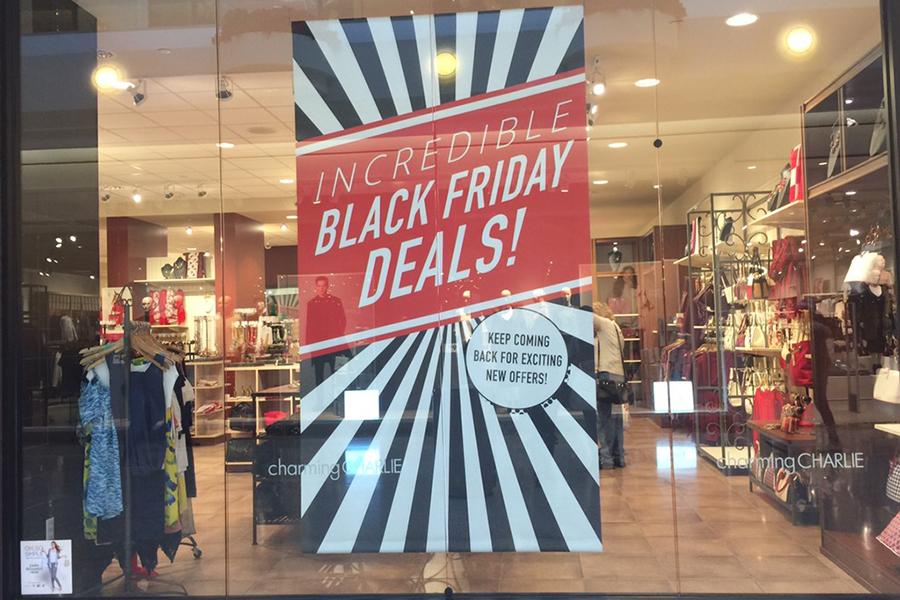 Charming Charlie’s in Southlake Mall advertises for Black Friday. The mall has been one of the busiest places to shop on Black Friday and has made holiday hours to accommodate this.

Traditionally known as the first day of Christmas shopping, Black Friday is an event in which millions of Americans spend their Thanksgiving evenings waiting to score as many deals as they can.

Some students enjoy standing in the seemingly endless lines at the earliest hours of the morning, but others feel it takes away from the family-oriented time of Thanksgiving.

“I think it’s a negative spin on something that is supposed to be positive. It’s supposed to be where you just go out and hang out with your friends and family and buy stuff that’s on sale. Instead, you have to deal with the stress of going out and beating traffic and standing in long lines that take forever to go through,” Cevanah Brazzale (10) said.

Thanksgiving evening, and even the rest of the weekend, can serve as more shopping time for eager Christmas shoppers.

“I don’t think it ruins [Thanksgiving] because it’s towards the end, like late at night,” Brazzale said.

Many shoppers are leaning toward shopping on Cyber Monday, where the same deals as Black Friday are available from the comfort of home. As many as 151 million Americans spent last year’s weekend after Thanksgiving doing most of their Christmas shopping.

This shopping culture began in 1924 as a way for stores to make the most money they could before the end of the year and to kick off the holiday shopping season. It has continued to grow and is now an integral part of the Christmas shopping experience.

“[Black Friday] doesn’t affect [Thanksgiving], to me, but I guess sometimes when [people] start on Thursday than it can affect it,” Karl said.