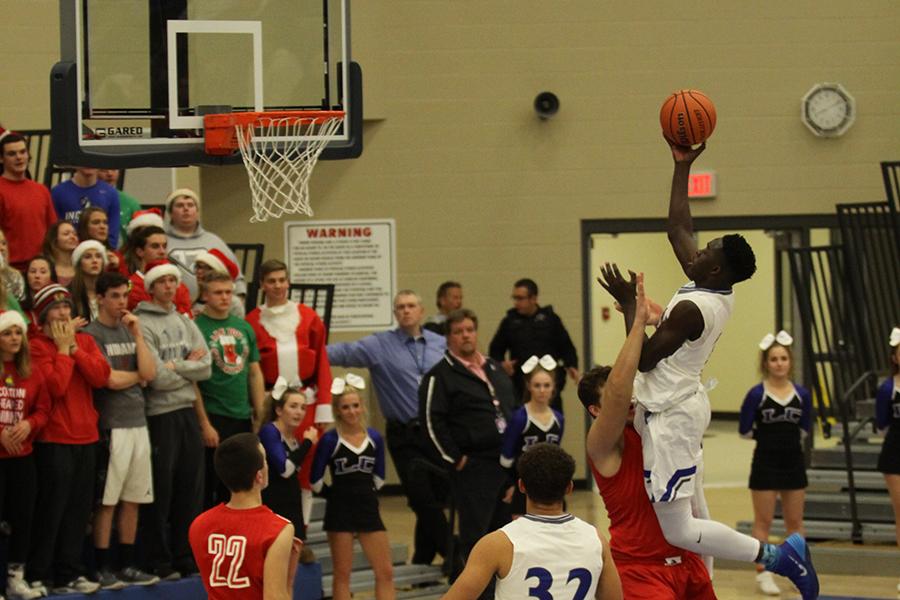 Norell Smith (12) leaps over opponents to make a basket. “We felt like since we were up we didn’t have to play [defense] or talk on [defense],” Smith said.

The boys basketball team was defeated by the Munster Mustangs on Dec. 20 with a final score of 54-65. The boys came out with a lot of energy and determination in the first quarter.

“We couldn’t match their energy at times. We’ve started fast in a lot of games and it has sort of tapered off, which is something that we need to work on as a team,” Coach Andrew Gurnak, Psychical Education, said.

Basketball isn’t only a physical game, but also a mental game. The boys went into the game feeling that they would win, so they were not prepared for Munster to strike back.

“I feel more like we beat ourselves than that they beat us,” Jack Davis (10) said.

The boys will be working hard to prepare themselves for the next time they meet Munster.

“We’re going to try to get better every day. We have a few days to really hone in on what we didn’t do great [on] last night. If we see Munster again, we know that we need to get a good eye on their shooters and match [Munster’s] energy on runs,” Coach Gurnak said.

Be sure to go support the boys at their Holiday Hoops Tournament at Columbia City High School on Dec. 27.