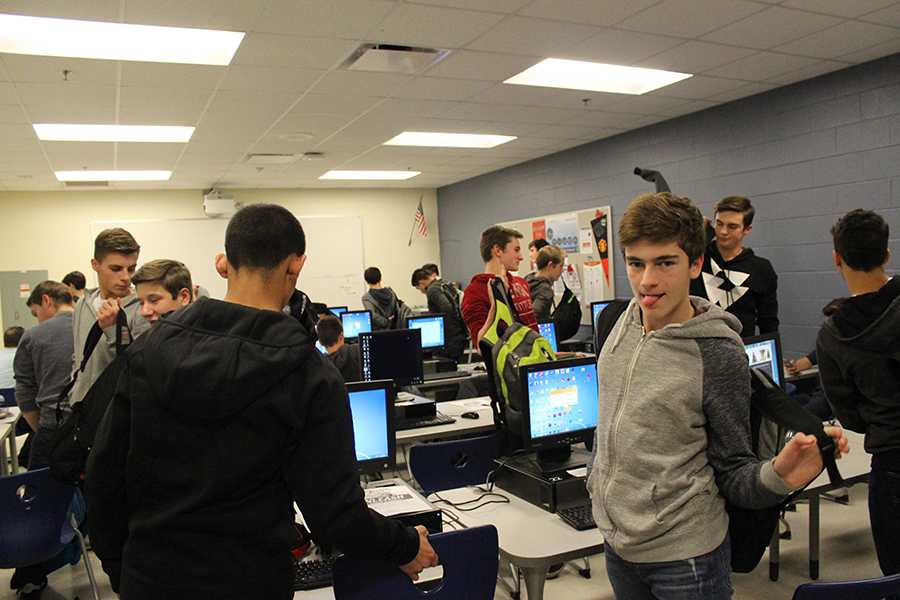 Student athletes all stand up as they are ready to leave the meeting. They talked about the 2016 season’s finish.

The boys soccer team met up on Tuesday, Dec. 13, to discuss multiple things for the upcoming season.

Coach Jereme Rainwater, Vocational, talked about fundraising, captains and more during the 20 minute meeting. In addition, he talked about their last game last season, coming up short to Munster 1-0 in the Regionals.

“In general, if I were to change one thing in last year’s game, it would’ve been the motivation for our team [during the match]. We should’ve jumped on them early, starting to score goals earlier. I told them it wasn’t going to be the same team we beat 5-1 earlier in the season, it was going to be a much closer match,” Coach Rainwater said.

In addition to talking about last year’s loss to Munster, Coach Rainwater talked about next year, working out and dates and times for tryouts. He also talked about the expectations for next season’s team.

“This is not a place or program where we come into the season with low expectations. I’ve known most of these players since they’ve been younger, so I know what I’m going to get out of them,” Coach Rainwater said.

Coach also said that he and the returning players have high hopes to win the DAC again.

“There’s no doubt that our team could win the DAC again. I feel like there’s no other team in the Duneland that’s better than us,” Coach said.

Of course he is excited for next season, but he still has the disappointment of last season’s final loss. The season officially starts on Aug. 1 when tryouts for the 2017 season will take place.