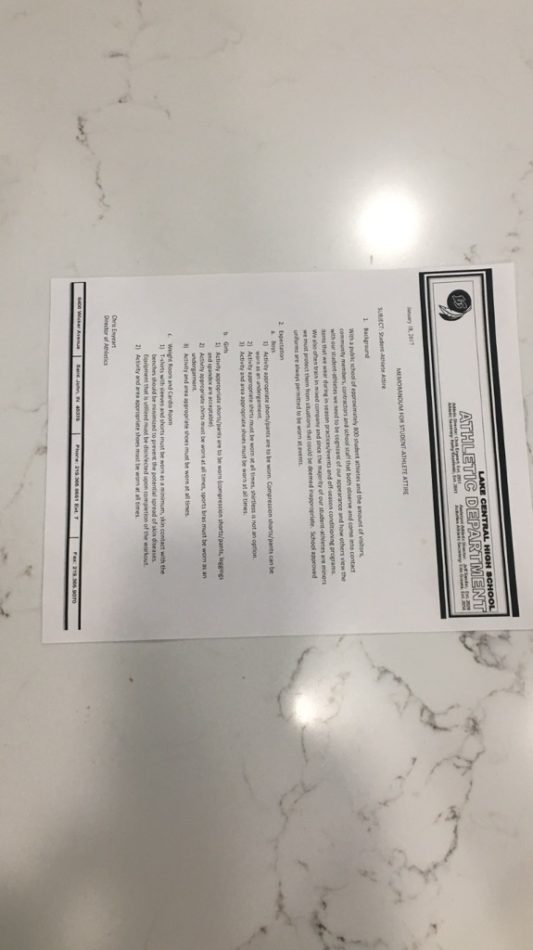 Student athletes were in for a surprise on Wednesday night. At a girls track meeting, the team was told by their new coach, Mr. Jeffrey Rhody, Science, the new athletic dress code.

“We were told at the track meeting that there is a new dress code for athletes. We aren’t allowed to wear compression pants, leggings or spandex anymore unless we wear shorts over it,” Sydney Vandersteeg (12) said.

Vandersteeg grew concerned because compression pants are part of a usual track uniform. Volleyball also uses spandex as part of their uniform. She posted a statement on Twitter expressing her dislike toward the new rule. After tweeting, students stood by Vandersteeg and voiced their own opinions.

“I wear leggings to school sometimes and it’s never a problem. I don’t understand why it would be an issue at practice when that’s what they’re made for, working out,” Vandersteeg said.

The athletic department declared that this was not the case, and that this rule was supposed to be directed toward male athletes only. A written referendum will be posted on the Lake Central Athletics website stating the dress code rules for males and females.

“As far as the stuff said on Twitter, [the rules were] presented to our coaches at our athletic counsel. My error was that I [stated the rules] verbally instead of putting it all down in writing with the coaches. That’s where misinformation was heard,” Chris Enyeart, Athletics, said.

Sports uniforms will vary on what is acceptable for that particular sport. Males are expected to not be shirtless during practice, and females must have a shirt on–sports bras are considered undergarments and are not to be worn alone.

“Every sport has it’s own expectations. You can’t compare swimming to basketball. Everything is a little different and that’s why we talk about it being activity-appropriate. [On the] male side, the compression shorts and pants can be worn but we ask that’s there’s a loose-fitting pair of shorts over the top,” Enyeart said.

The dress code is not limited to just practices and events: in the weight room and cardio room, shoulders must be covered to prevent the expansion of skin diseases.

“Our students are highly visible all times of the day, whether they’re outside or inside, because our facilities are always open. We want our community to feel comfortable about what our students are wearing. We do feel that what we’re asking [for] won’t cause a drop in performance,” Enyeart said.