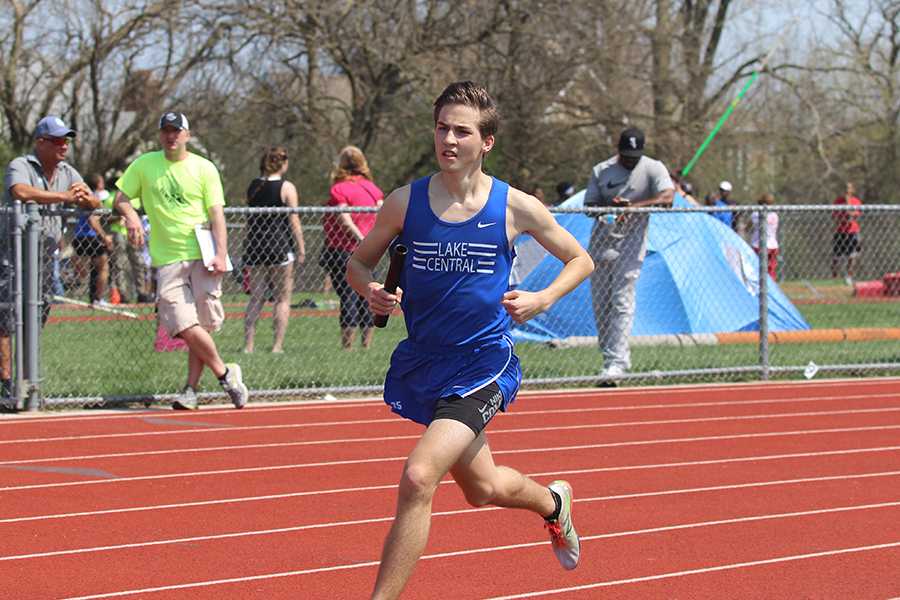 The boys track team competed in the Dick Beebe Classic at Homewood Flossmoor High School in Illinois on April 15. The boys were returning as reigning champs hoping to defend their title and take first place again.

“I expect to compete and defend our title. I think we are in a good place now and on a good track,” Mr. Jeffery Rhody, Science, said.

The day began with field events ranging from high jump to the disk toss. Lake Central took second in High Jump and Jack Davis (10)  jumped his new all time high of 6 and one-half feet. This would make two consecutive meets where Davis would beat his personal record, and he qualified for State

“I think it is surreal because at the beginning of the year [going to State] wasn’t really on my mind. It was to get better everyday and I didn’t think I would be qualifying for State this early in the year. Being a sophomore and qualifying for State it is really really hard in Indiana. I just feel blessed,” Davis said.

Davis would not be the only one taking the glory from the field events in the disk toss. Michael Taylor (12) got the Indians into a second place finish throwing a incredible 144 feet. Taylor’s teammate Jonas Sparks threw a new personal record of 142.9 feet.

“I placed second for disk toss throwing a 144 [feet]. For shot I threw 46 feet and that placed me second as well,” Taylor said.

As the day went on, the runners began to take the spotlight. The boys though competing well did not take first in many races. One of the big factors to the race was the wind. As the runners would turn the corner of the track and begin running towards the finish line a blast, a blast of wind would hit them in the face and slow them down. Only the top runners were able to increase or even hold the speed they were at throughout the race.

“The wind made the home stretch a major struggle and very difficult to run in. It made me think of my strides and if they were long enough,” Andrew Ackerman (12) said.

The boys Freshman Sophomore race ran the 4X4 relay. The boys ran a competitive race and what many assumed would be a major loss for Lake Central after the first two runners fell behind due to the wind. The third runner Gurvir Gill (10) ran an outstanding lap and managed to put Lake Central in the lead.

“All I could think was I really wanted to win, so as I was nearing the 200 meter point I surged and was able to make the final 200 and put us in the lead,” Gill said.

In the end the races came down to the final man but the boys would not be able to hold onto their first place title. The boys placed second and lost only to the home team of Homewood Flossmoor. With a final score of 107-119. “I think the team did great a lot of people did well. I wish we could have won but we lost by only a few points,” Antonio Pavloski (12) said.