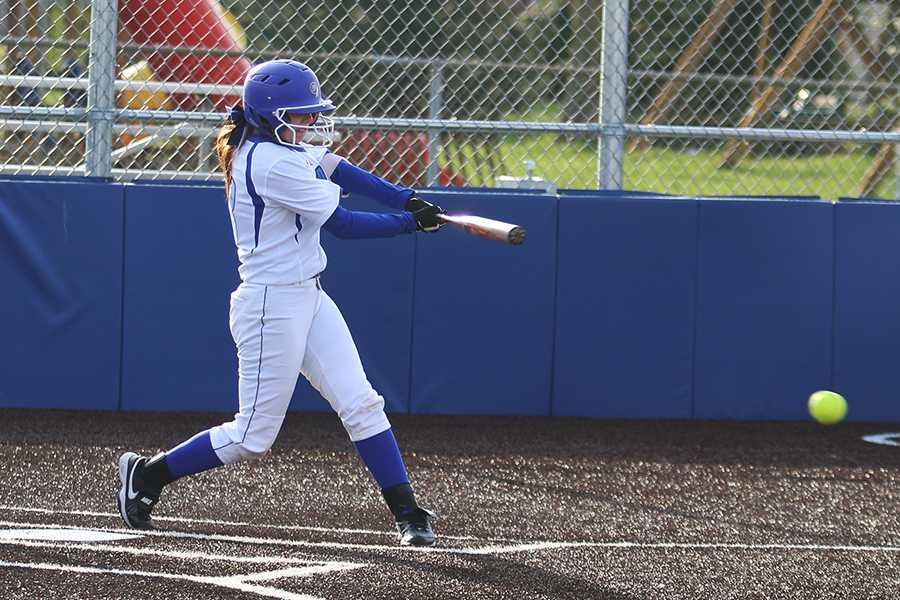 Madisen Tucker (11) hits the ball. Tucker had one hit out of her three at bats.

The lady Indians took on the Michigan City Wolverines on Wednesday, April 24, at home. Despite the dreary weather, the team was able to defeat the Wolverines with a final score of 18-1.

“It was raining and the weather was kind of annoying, so we knew that we had to just focus on ourselves and not the weather; just beating the other team. Michigan City is usually not as competitive as other schools so it was important to stay within ourselves and keep on getting better for other teams,” Alexandra Hickey (12) said.

The girls used this game as a chance to work on their own personal skills, particularly at the plate. Everyone in the lineup got at least one base hit, and Hickey lead in RBIs with three total.

“The hitting was good because we were able to string it along. We had a lot of hitters who were maybe in a bit of a slump that were able to make good contact and have improvement in their hitting. We were able after two outs to keep the inning going instead of just giving up,” Hickey said.

Madisen Tucker (11) also stood out on the mound. Her pitching in combination with the team’s defense held Michigan City to one run.

“Tucker did really good pitching yesterday, she hasn’t pitched in a few games so it’s good to see her get a lot of strikeouts and get quick innings,” Hickey said.

The softball team hopes to use this game as both a practice and a predictor for the rest of their season and into postseason play.