Freshman Rushing To A New Year 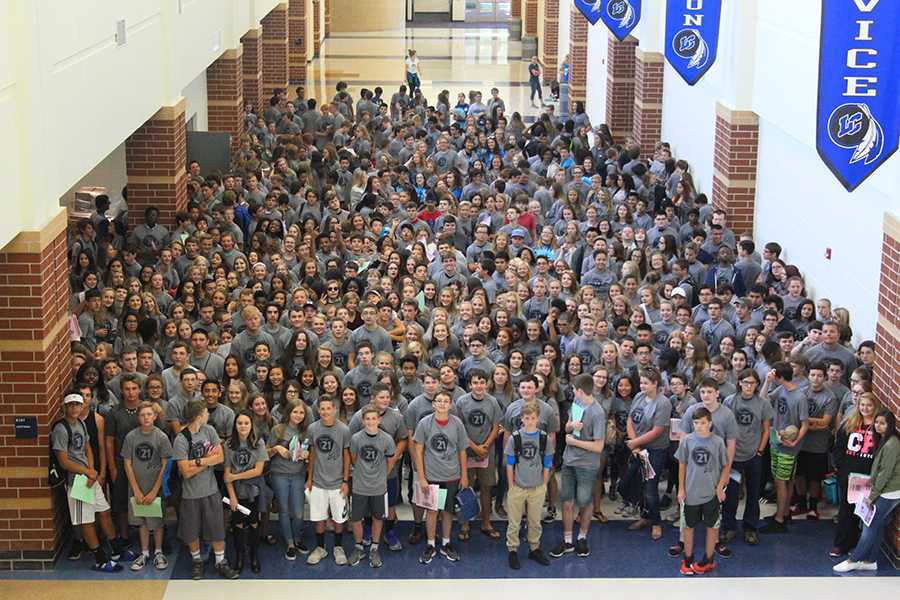 Class of 2021 stands in Main Street for the first time as one large class.

The classrooms have been cleaned, the hallways made spotless, and the new textbooks have arrived. It’s time for a brand new school year. Kicking of the 2017-2018 school year Lake Central High School opened their doors on August 8th for the Freshman Rush. Students started the morning in the auditorium where they were given a speech and introduced to the staffers that they would encounter throughout their years in the high school.

“I think we were [freshman class] able to find most of our classes and look around the school more so we won’t be as lost on our first day,” Hala Haddad said (9).

Following the assembly in the auditorium, students were paraded out into the hallway where they met upperclassman who would be with them throughout their first year at the high school. The new students were given t-shirts for a class picture that was going to taken later in the day. The upperclassman that had been selected had experienced leadership roles and had memorized the school by heart.  The tour began by the freshman being taken to their PTE classroom where they got to know each other a little more and get to know their peer mentors. Afterwards they received a full tour of the building by the upperclassmen.

“I think the tours went really well, the freshman rush in general was very beneficial the tours were really organized and I think it gave the freshmen the ability to tour the building and feel more confident for the first day,” Courtney Rhomberg said (12).

At 11:45 the class of 2021 gathered in Town Hall and they took a class pick. Afterwards the students were dismissed to lunch where they were given hotdogs a bag chips and a soft drink. Once lunch had concluded they were allowed to walk the building and find their classes on their own or with help. The day concluded at 2:00 when the freshman began leaving and heading home. With smiles and a bit more confidence for the first day.  “I feel that most of the freshman are well prepared for the first day of school. During freshman rush we went over the essentials to have a successful first week of school and how to thrive at Lake Central,” Carter Goldman said (11).