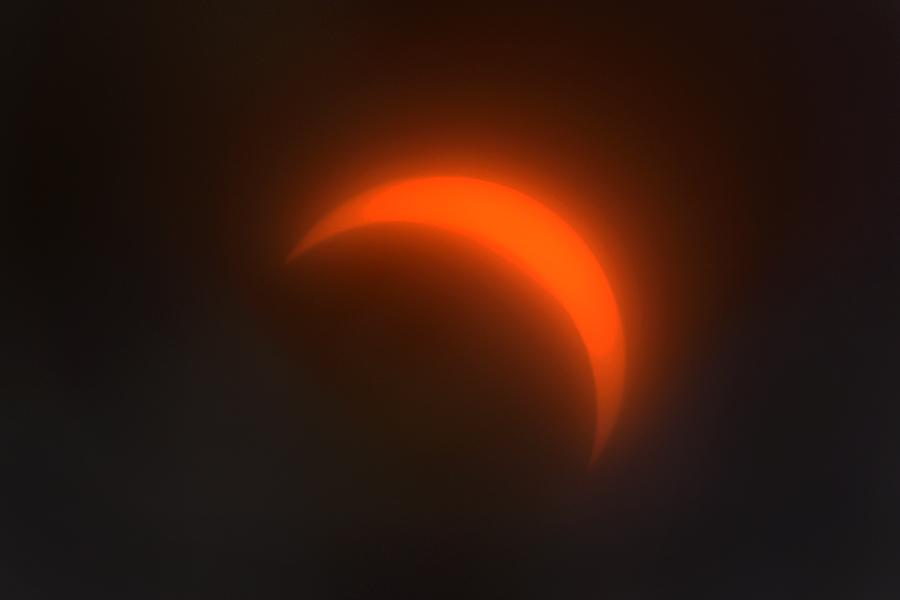 The eclipse at 90 percent totality. The solar eclipse could be viewed safely through Mr. Bushong’s filtered telescope.

On Monday, Aug. 21 at 1 p.m., nearly 3,200 students filled the football stadium to the beat of “Total Eclipse of The Heart” by Bonnie Tyler. The growing crowd gathered together to witness a solar eclipse that last occurred over one hundred years ago.

“We haven’t had a full solar eclipse hit North America since 1979. The last time that it went coast to coast was 1908. [Solar eclipses] happen all of the time, but for it to actually hit dry land and happen to go across the United States? That is a rare occurrence,” Mr. Eric Bushong, Mathematics, said.

Bushong is a math teacher who has a deep appreciation for astronomy. He even runs the Astronomy Club and was so inspired by the occurrence of the eclipse that he made it his mission to provide a once in a lifetime experience for his students.

“I initiated the grant [to purchase eclipse glasses]. We applied for that last spring [and] it was granted to us.Through the Lake Central Education Foundation, we acquired $500 to help pay for them. [The glasses] block out 99.999% of the radiation so that when you look at the sun the radiation doesn’t hurt your eyes,” Bushong said.

As students made their way into the designated viewing areas, Bushong admired the organization and perseverance of those who helped him accomplish his mission.

“There has been so much planning for this, and not just on my part; Mr. [Sean] Begely [Head Principal] and the administrative team have done a great job of making sure that everybody is lined up and where they’re supposed to be in order to make it a successful and enjoyable day,” Bushong said.

Moments before the totality of the eclipse, students marveled at the event that they were witnessing. Just like Bushong, Courtney Carlson (12) appreciated all of the work that was put in to provide them with a great experience.

“I am very excited for the solar eclipse, and I’m having a great time. I feel like this is a cool thing that Lake Central gets to do and I’m glad that it’s super organized so that we could be out here today,” Carlson said.