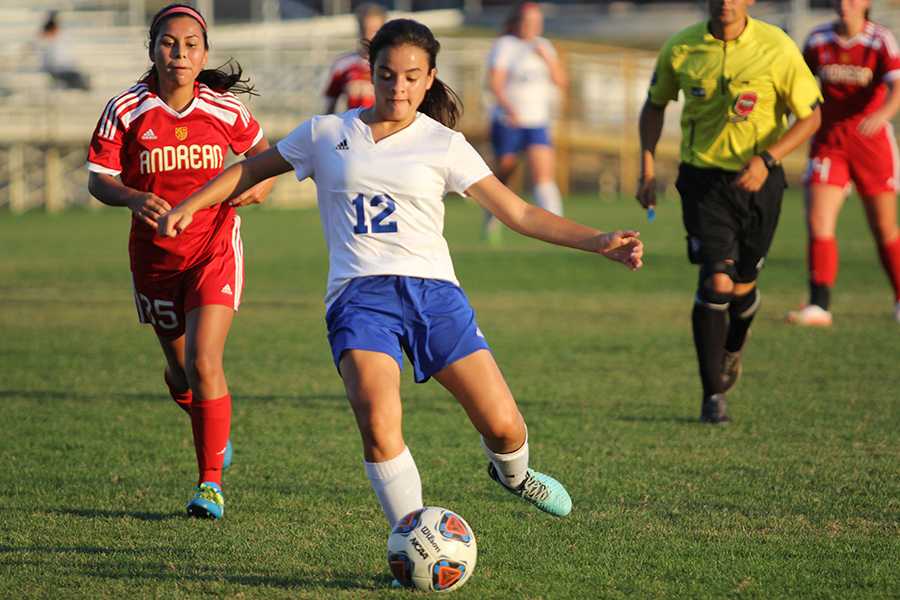 Veronica Ruiz-Avila (9) kicks the ball toward Andrean’s goal. This is Ruiz-Avila’s first year on JV.

“We were connecting really, really well and our passes were spot on. We’ve been trying to work on talking a lot more, and that’s what we’ve been doing,” Sophia Hoyda (9) said.

Karisa Candreva (11) scored the ladies their first goal of the game. The team scored four following goals. Even though the weather was hot, the girls adjusted well to the heat.

“I think [the heat] helped us because we had to play a different style that we’re not used to. In the last half, [the girls] played without a sub, so they had to change the style that they played. They started connecting their passes more, so I think it helped them in a way that we had to change our style and continue to pass and create our chances that way versus constantly running because we knew we couldn’t do that,” Coach Vincent Pucci said.

The win added to the girls’ winning record but despite the win, the girls keep pushing on to get better.

“As a team, we’ve really been stepping it up. If you came to watch us in the first week of practice to where we are now, the growth has been fantastic. We have a couple more games to get [our] goals, and get that record up a little,” Coach Pucci said.