Bonjour to a new year 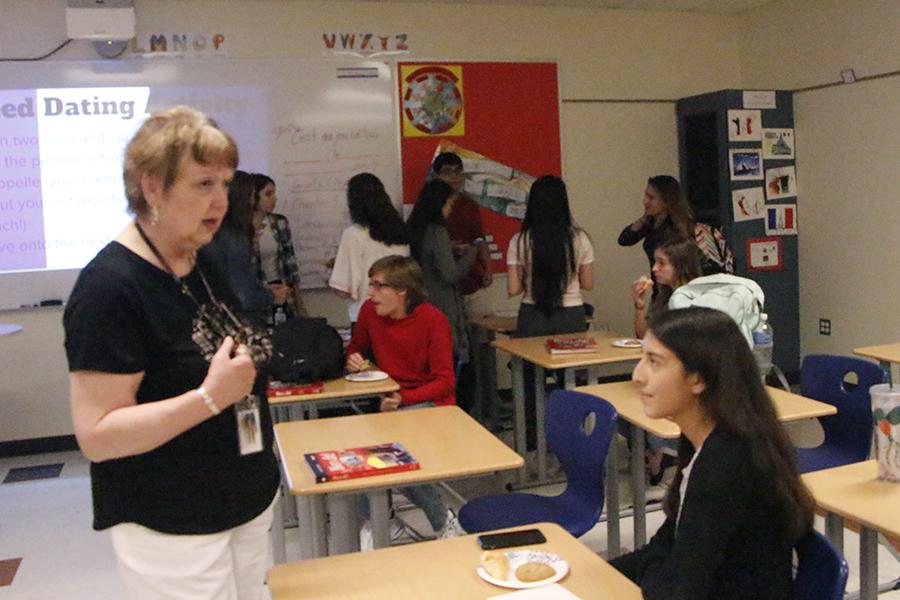 Ms. Bovard talks with a student about different French foods and treats. Ms. Bovard had been sponsoring French club for the last two years.

The first French Club meeting this year started out with French Club officers introducing themselves and addressing the topics they will be going over throughout the year. Ms. Beverly Bovard, World Language, introduced herself and told all members her plans for this year’s French Club.

“For this year’s French Club we’re trying to reach new heights that we couldn’t reach in French Club in our previous years. They [were] more experimental, but this year we’re trying to go more in depth with French society, French schools [and] comparing and contrasting the average life of a French student and an American student,” Theodore Mantis (11) said.

“I’m excited to learn more about the modern French world and how people actually act [in France] because they don’t really teach you that in class,” Hupp said.

Mantis, president of the club, told what he wants to accomplish this year. He hopes for more students to hear about French Club and join in on the fun.

“We’re trying to do things such as explore French fashion, more of French history that we couldn’t cover last year. We’re still going to cover French traditions and holidays, but we want to go more in depth with other things that other clubs don’t get into,” Mantis said.

The next French Club meeting will be held on Tuesday, Oct. 24 in C107. There will be a special presentation from students who traveled to France this past summer.

“I think we have a good mix of more mature French language students so they bring some background and experience. More goals for this year are to do more things that are directly related to French culture and introduce these students to opportunities. Next meeting we’re going to have the students that went to France last summer come in and talk about their experience,” Ms. Bovard said.