‘Deck the halls’ after Thanksgiving 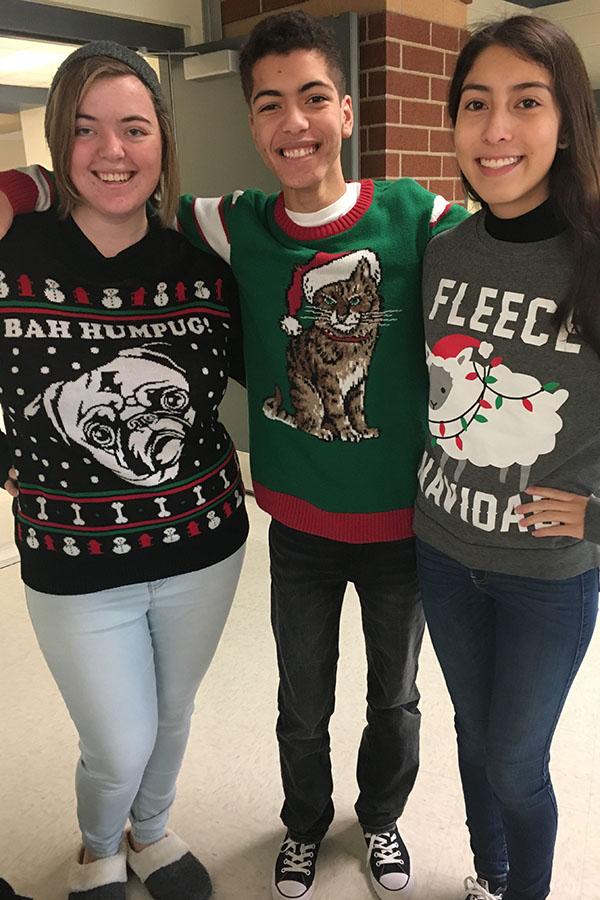 Hailey Kitchell (12), Nathaniel Tamez (12) and Erika Araujo (12) wear Christmas sweaters. They wore these to get ready for the upcoming holidays.

Christmas is a holiday to look forward to for those who celebrate it, but it isn’t until the end of December. Even Black Friday isn’t until the end of November.  Many people seem to forget, though, that there are holidays between October and December.  November has Veterans Day (which may not have much jazz and decor, but certainly still has importance) and Thanksgiving.

Yes, Thanksgiving is a holiday that only takes a few days planning, including getting the family together, deciding what food to serve, preparing that food – as compared to its counterparts of Halloween and Christmas, which typically take longer to plan for, but that doesn’t mean it should not receive attention.

Thanksgiving dates back to 1621 when the Pilgrims celebrated their first harvest of the year, meaning it has been an annual tradition for hundreds of years. There are a lot of opinions on the arrival into America, which, in turn, affects opinions of Thanksgiving. Although now in 2017 we can realize and acknowledge that the arrival into America resulted in unfair and abusive treatment of the Native Americans, it does not disqualify Thanksgiving as a holiday.

It is completely okay and acceptable to not celebrate a holiday. Just like some people don’t celebrate Christmas or Hanukkah, Thanksgiving does not need to be celebrated, but that doesn’t mean it should be entirely skipped over. Leave the winter holiday decorations down until December, or at least after Thanksgiving dinner, if you eat it, even if the decorations go up only an hour after eating. Allow that transition to happen naturally rather than forcing it in early November.