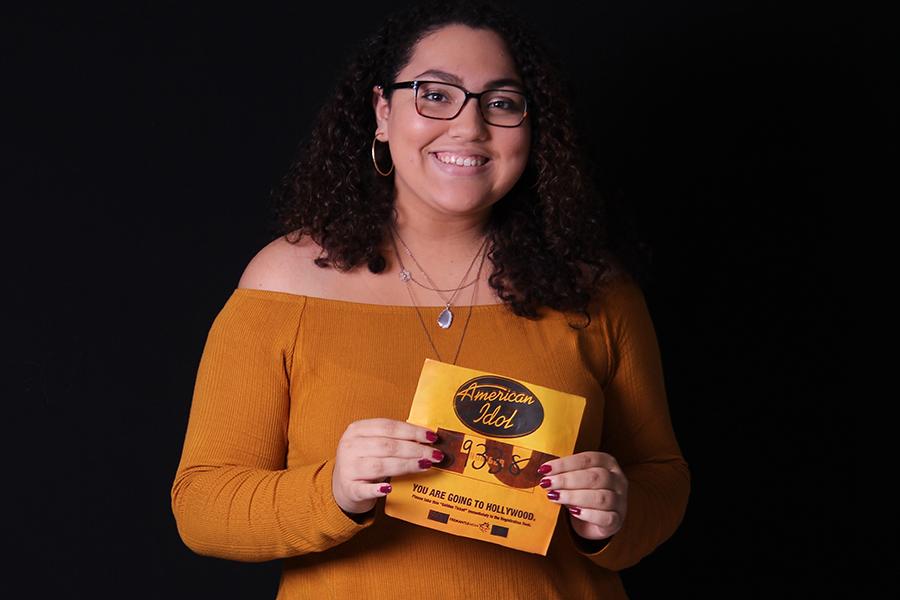 Amanda Aponte (12) holds up the certificate for American Idol. She will find out in December if she will be featured in the show and make it do the next round.

Q: When did you start singing?

A: I started singing when I was seven-years-old. I would watch lots of Disney movies, and I would always be singing along to them. My favorite piece was Mulan’s “Reflection”, which really sparked my interest in music.

Q: What made you start singing?

A: What made me start singing was my grandpa telling me I have potential. He was a singer when he was younger and it meant a lot to me and I wanted to make him proud and try to live up to his legacy as a musician.

Q: What musician has influenced?

A: There have been many musicians, but the one who has impacted me the most is Celine Dion. I have listened to her music all my life, and I want to be the type of singer she is. Her vocals are very powerful and behind every one of her songs it holds a theme that someone can relate to.

A: Auditing for “American Idol” was a crazy but amazing experience. When I got there, there was hundreds of people just as anxious as I was. I ended up making some friends while waiting in a big room for three hours. There was people singing and crying because their nerves were so intense. Many people were getting sick and fainting. It was a really nerve-racking experience.

Q: What was it like the moment before you got in to see the producers?

A: The moment before I went to the audition I started getting really nervous again. It was me and three other girls, which was terrifying because we were all going to see each other audition. The door that was the scariest part, it was the gate to pursuing my dream. It was that moment where I realized that this is the road to living my dream. This is the first step and I pushed that door as hard as I could as a way of saying, “I’m ready.”

Q: What song did you choose

A:I chose “Where the Boys Are” by Connie Francias. I love oldies songs and this song is a big part of the ‘50s. It has a variation to it which was good to impress the judges.

Q: What was it like performing in front of the judges?

A: There was a table with one woman at it. She was one of the producers. The friends I had made sang their songs. While I saw them performed, it eased my nerves. It made me feel like I was at choir. Meeting these girls heavily impacted me performance in a good way.

Q: How did you feel after you were done?

A: After I was finished, I was proud that I went to the audition and I didn’t let my stage fright get the best of me.

Q: Where you stand now as a musician?

A: As a musician, I am still working hard at my YouTube channel, and I am going to college for music. I hope singing can be my career one day because for me it’s not a hobby it’s what I want to do for the rest of my life.

Q: What college are going to?

A: For college, I plan to attend Berklee College of Music Conservatory for musical theater. I hope to be on broadway one day.