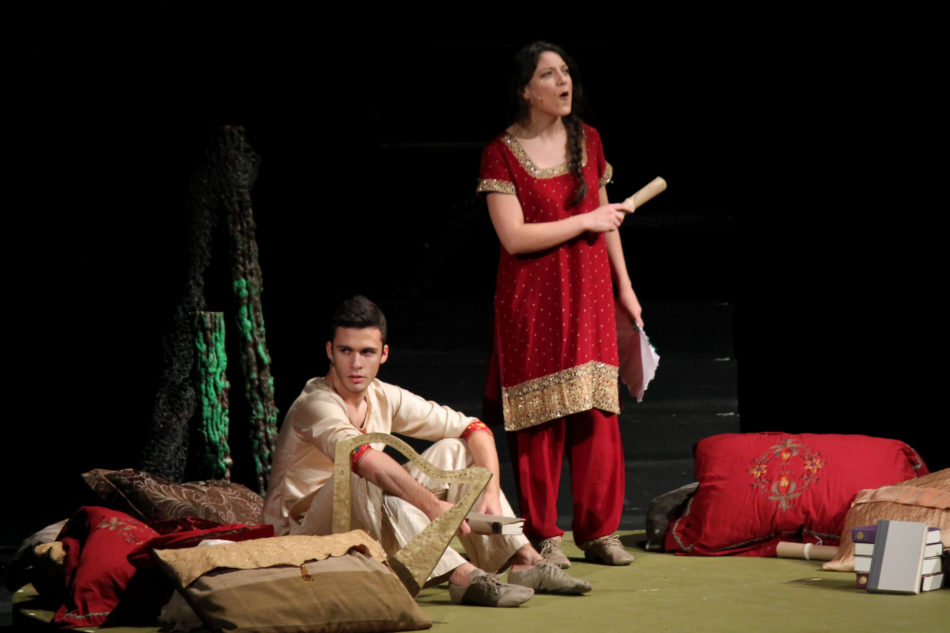 Theodore Karras (12), playing prince Amir and his mother, played by Vanessa Torres (12), discuss plans for the ball at the palace. The sets for the palace, forest and other locations in the play were done by nine volunteers.

The audience in the opening night of  “Ashgirl” were in awe of the show’s dark take on a traditional fairytale.

The casting for “Ashgirl” totaled to 21 performers, and 19 crew.

“I think this cast really meshed well together. A lot of the time everybody had their own friend groups, and everybody was just a big family this time around,” Cherylynn Gholson (11) said.

The journey to “Ashgirl’s” current success as a play did not come without its fair share of difficulties.  For some of the actors, such as Theodore Karras (12), these difficulties are more internal than one may imagine.

“I found a lot of difficulties within myself just as an actor. I always question, ‘How I can be better?’ Not necessarily what I’m doing wrong, but what can I adjust to and [my directors] gave me a lot of tips on how to see the difference that I wanted to see,” Karras said.

Actors and actresses see this play, or theatre in general, as a bonding experience creating unbreakable friendships, as seen in how well the actors work together in “Ashgirl”.

“Theatre provides a second family within your school. I mean you always have your friends and your actual family, but when you come into theatre, you have to be so close to each other, that you have to be a big family and love each other and care for each other. I think that’s the best part,” Gholson said.

“Ashgirl” plays around with the theme of having enough confidence to reach your dreams, or in Ashgirl’s case, love.

“Theatre is a very good way to come out of your shell. When I started theatre, I was a huge introvert. I had my first audition, and I left auditions because I was so nervous. It really helps you break out of your shell, because [for] people who are really shy, you’re playing a different character so you’re not being you, you’re being someone else, and that’s what makes it easy,” Olivia Throckmartin (12) said.