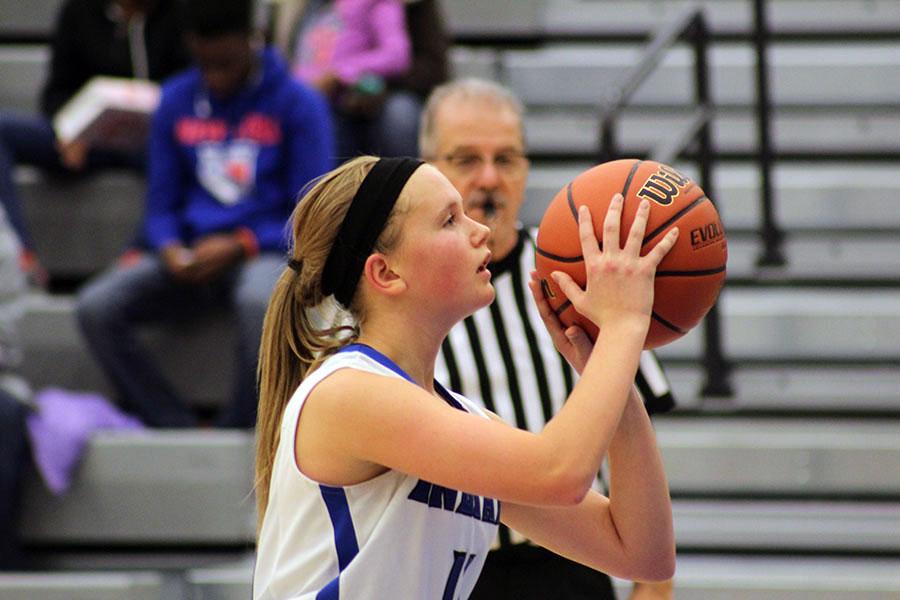 Makenna Hullinger (9) focuses before taking a free throw. Hullinger was able to make the shot.

The freshmen girls basketball team showed teamwork on the court as they played against Chesterton Thursday, Nov. 30.Freshmen girls won with a final score of 36-12

“Of course we’re always determined to win every game, but we were very determined to win against Chesterton because they’re one of our bigger rivals and it was also a DAC [Duneland Athletic Conference] game. I thought it would go really well because I knew we were prepared for the game and anything Chesterton had to throw at us,” Tatumn Damron (9) said.

The team worked effectively to get a good lead against Chesterton.

“We have been working good as a team, playing hard and staying focused. Our strategy for game days is to come out with energy and play hard throughout the whole game. Also, getting a good lead in the beginning of the game,” Jacqueline Kosina (9) said.

“I think our season is going great. We grew strong as a team and as friends, and our coaches are great. We’re having a lot of fun and the team worked together to win a lot of games,” Joie Mulligan (9) said.

Freshmen girls won with a final score of 36-12. The girls supported each other and all their hard work paid off.

“It’s really fun to be on the team because we are all friends and we all work really hard at practice and at games,” Makenna Hullinger (9) said.