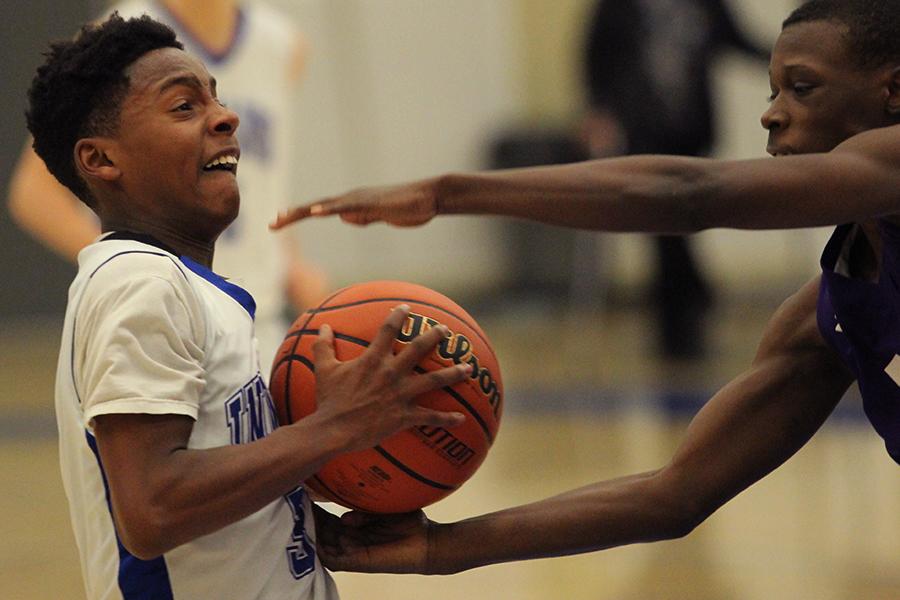 Caleb Dotson(9) tries to keep the ball away from the other team. The boys lost to Merrillville 45-54.

The freshman boys basketball team played a close game Monday, Dec. 4, losing to Merrillville 45-54.  Although the team lost, the boys say their fifth game of the season was a good one.

“We made little mistakes and that’s why we lost, but other than that I think we did good,” Kyle Nichols (9) said.

One of the problems the team faced on the court was their energy.

“I think we started off well, but we didn’t finish strong because we didn’t pick up our intensity.  [Merrillville] was all fired up and we should have had more energy,” Bryan Stokes (9) said.

Despite having lower energy, the boys were prepared to take on that night’s opponent.

“I wasn’t worried, but I knew [Merrillville] was a fast team so we just had to be ready,” Stokes said.

The team also had some high points throughout the night. The team’s dynamic helped score some shots, adding to their final score.

“Especially in the first half, we had good team chemistry and we really watched out for each other,” Caleb Dotson (9) said.

Along the sidelines, coaches watch their team play and give constant feedback to help the boys improve.

With the help of coaching and practice, the team can work hard to reach their goals for the season.

“[Coach Fry] really cares about us and wants us to play to the best of our abilities.  He doesn’t want to see us fail.  He wants to see us do more, not just in school but in life,” Dotson said.