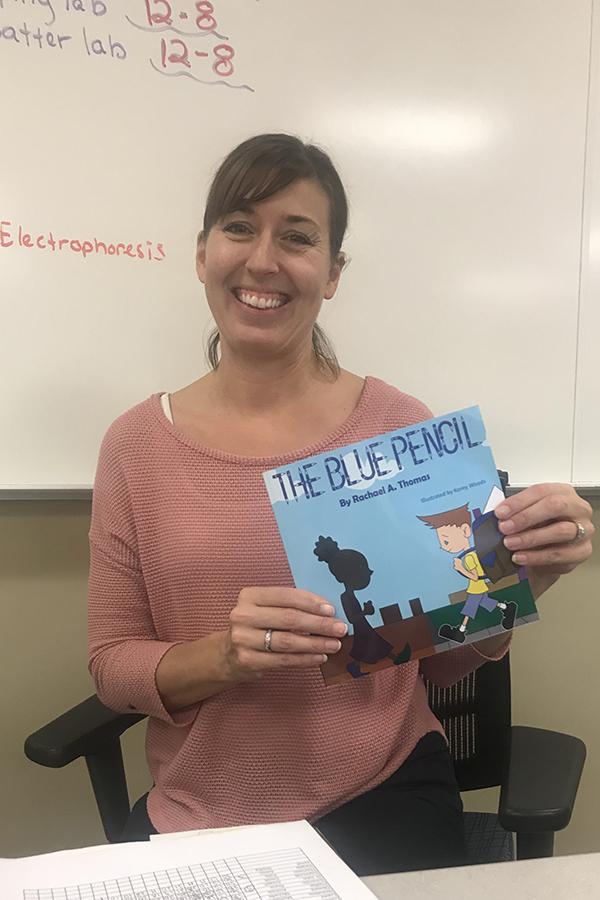 Mrs. Thomas, Science, holds the book she wrote. It is called “The Blue Pencil.”

Q: What book did you write?

A: I wrote a children’s picture book called “The Blue Pencil”.

&Q: What is your book generally about?

A: It is a pay it forward story. It’s about a little boy who finds out about a little girl who lacks school supplies and so he comes up with a plan to help her get what she needs.

Q: How does it feel to have people buying and reading your book?

A: It’s a little nerve wracking because you are afraid of what kind of comments you are going to get, but it feels really good when they do give you positive comments

Q: How long did it take for you to write, illustrate and finish the book?

A: I had the idea in 2010. So the idea started seven years ago. A year ago I finally sat down and said I need to really focus on this so I started writing it. Then I began to get help with it, going to writers groups and getting more ideas, whether or not it was a good idea. After I finished the story, I submitted it to publishers and then they are the ones who do the illustrations, so that took a little while. It was about seven years in the making.

Q: What made you want to write a book?

A: I went on a mission trip, and I felt like after I got back I realized we have a lot here in the United States. My kids were little and I thought of this idea of a little story that could help people realize that giving to other people is really a positive thing, even if it’s really small.

Q:  How many books do you plan on writing?

A: This book is a series because the little boy gives something to the little girl and then she’s going to give it to somebody, and then they are going to give it to somebody. So I am expecting at least four books out of this series where it goes to different countries. In the first book it going from the United States to Africa, then nexts book will be Africa to China. I’m not positive where the next ones will go. I also have a couple older book ideas in mind as well. I have a lot of kid book ideas, a couple of them are science related.