Swimming past the Vikings 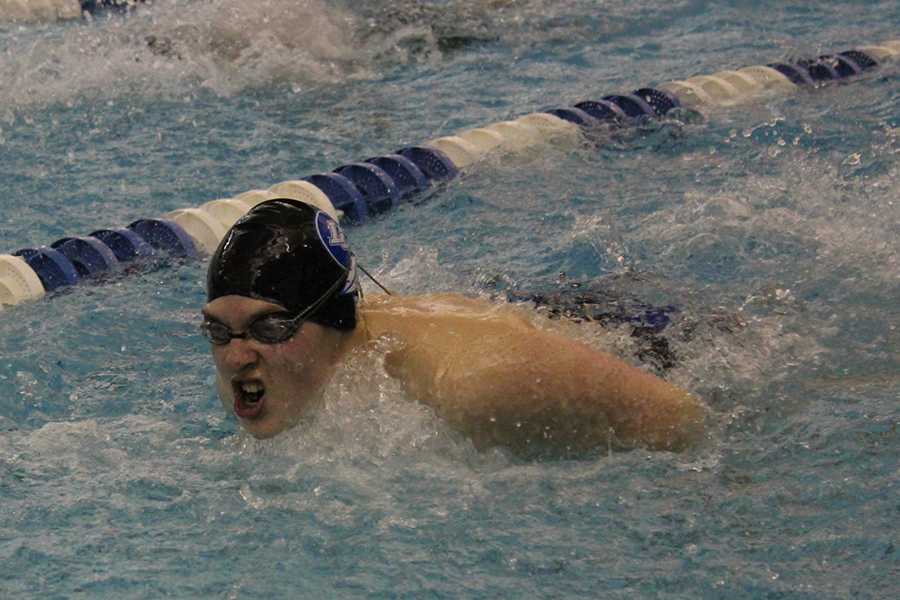 Swimming the 100 fly, Joshua Burton (10) takes a gasp of air. In past meets, Burton swam the 100 backstroke, but Coach Jeff Kilinski has been placing him more in the 100 fly.

As the boys swim team walks into the pool area, they chant and circle around their wooden Indian wearing goggles. Stevan Vuckovic (12) lifts up the mascot in confidence as his teammates circled around him, making enough noise to intimidate their opponents for the night, the Valparaiso Vikings.

“I feel it intimidates the other team by how loud we are and it shows how bad we want to win,” Riley Ingram (11) said.

After losing four seniors and some valued swimmers quitting at the end of last season, going into meets some of the boys, such as Joshua Burton (10), are struck with some nervous thoughts.

“I thought it was going to be a competition and we had to work hard because our team isn’t as good as it was last year with people graduating or quitting,” Burton said.

As the buzzer rang for every race, the swimmers not in the race showed great enthusiasm in rooting on their teammates. That night, the Valparaiso Vikings attempted to reach the amount of encouragement the Indians were competing with.

“We encourage each other by cheering and giving mental support to boost their [teammates] confidence,” said Burton.

The pool roars with encouragement and is never silent until the last Indian swimmer finishes.  One close race, the pool was particularly loud for, was the 100 freestyle. Ingram expresses the difficulty of this race.

“I feel like my 100 freestyle is my tougher event because anything can happen. You can mess up on your turn and breathing control and breakouts,” said Ingram.