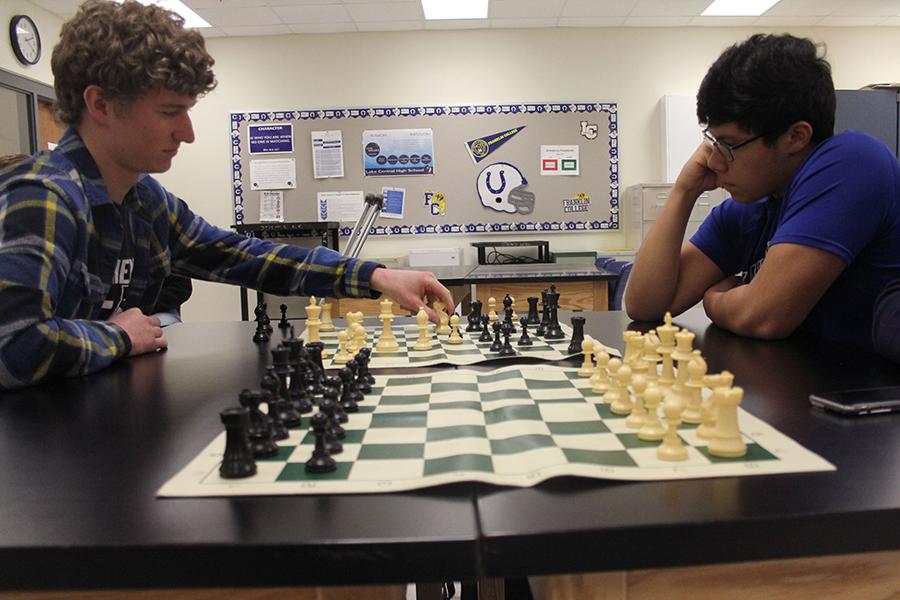 Joseph Jakubowicz (12) and Nick Rivera (12) dual in a match of chess. For those interested in joining the Chess Club, see Dr. Dustin Verpooten, Science, in C326 or your councillor for more information.

Chess Club is one of the many extracurricular activities students can participate in after school. Many join this club because of their likeness towards chess and the bonding experience it can create between them and other club members.

“We thought it’d be fun because he said it would be a fun time to hang out with friends, learn how to play chess, so we just thought it’d be cool,” Lordes Raguindin (12) said.

Chess is proven to help stimulate and improve the brain’s functionality. It can also be used as a good networking or communicating tool.

“[Chess] causes you to think on the spot, so obviously that would help in future jobs or obstacles that I’d have and it’ll look good on a resume,” Jessica Villegas (12) said.

In the early days of Chess Club, there was an enormous influx of new members.  Although this amount seems overwhelming for some, it’s just been another part of their wholesome experience with the club.

“[My favorite moment] in chess club would be the first day, where we didn’t even have enough [chairs] because the whole room was filled, and there were like 70 people that came,” Raguindin said.

The club has started participating in the Club Fair in hopes of increasing the reception of new members.

“I think [since] this is the first year we did the Club Fair, not too many people knew about [Chess Club, but] people went to that and that helps a lot and [was also helped by] people telling their friends,” Megan Hraban (12) said.

Knowing all the social and mental benefits of playing the game, chess is seen to have a potentially large impact on the futures of its players.

“The good thing about chess is [that] it’s not just a game, it’s a process, much like science, where you’re putting in problem solving skills, analytical thinking and logic,” Dr. Dustin Verpooten, Science, said.

Chess may be a very competitive game, but the bonds that form from it and the benefits your mind gains make it a worthwhile experience. For more information on joining chess club, see its sponsor, Dr. Verpootin in C326.

“If you like to play strategy games, then it’s a good club to join. [For people wanting to join chess club], just be yourself, have fun [and] learn the game,” Dimitri Koliavas (9) said.