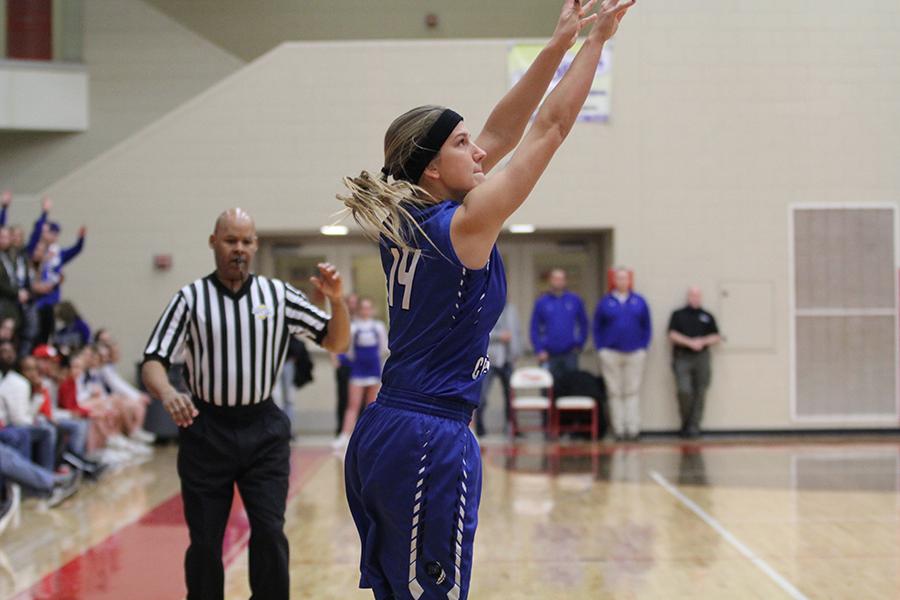 Chaeyne Mathis (12) shoots from the three point line. Mathis is on her third year of varsity girls basketball.

The girls varsity basketball team played their second game in the Class 4A Sectional championship at Crown Point High School on Friday Feb. 2. The girls competed against the Highland Trojans.

Though the championship was not until the next day, Saturday, Feb. 3 the girls were already focussing on the next game.

“We were very confident about winning Sectionals because our team constantly works hard, and we never give up,” Taylor Jaksich (11).

The game started off with the Indians dominating the first quarter and taking a commanding lead. From there, Highland attempted to score a few points and rebound and try and turn the game in their favor.

“Defensively we came out great within the first three minutes. We got into some foul trouble but we rebounded,” Head Coach, Joe Huppenthal, Mathematics, said.

At halftime Lake Central lead with a score of 23-11. Both teams had to strategize on how either to keep the lead or prevent the other team from scoring.

“I don’t think I need to foul as much as I did in the beginning, but I needed to stop reaching so that kind of got my game,”  Lauren Ladowski (11) said.

The second half of the game was closer than the first with Highland coming back and scoring several points and bringer the score closer. The fourth and final quarter though the Indians sealed the deal and took control and ended up defeating the Trojans 42-29. With the win the girls went on to the Sectional championship where they would defeat their rival, East Chicago, in a blow out game and win Sectionals for Lake Central.

“In the second half I fixed a few errors that I had made in the first half and the team came together for a win,” Ladowski said.