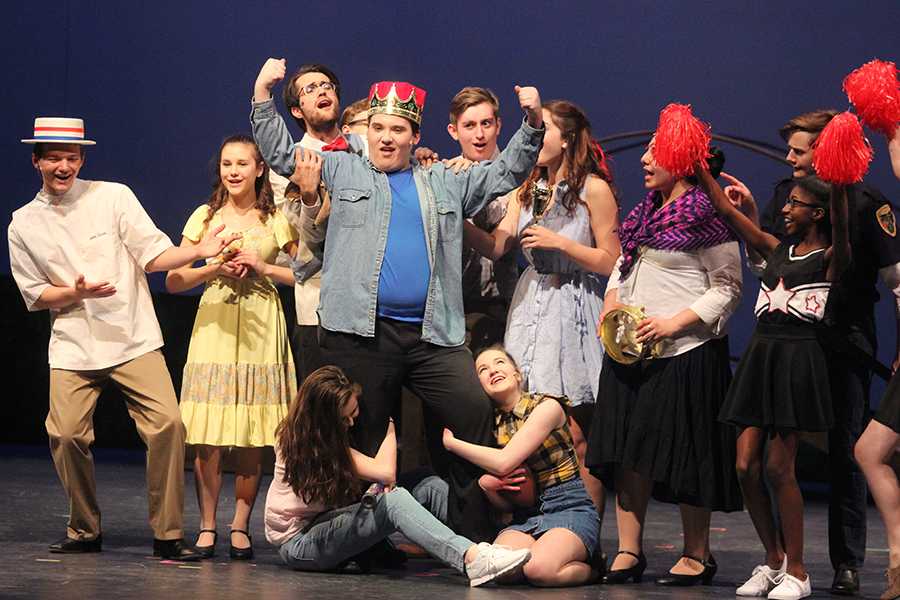 DeJarlais is surrounded by everyone in Ashton at the end of the “Ashton’s Favorite Son” scene. The musical lasted two and a half hours.

On Friday, March 9, the theatre company performed their first performance of “Big Fish” the musical. The musical had many messages behind it to help teach important values in life.

“I think I have two favorite scenes, the first one is ‘Out there on the rode.’ I like it a lot because it’s really fun to sing and it’s my main scene with Carl the Giant, and he’s really fun to act with and be a scene partner with. My other favorite scene is the song I sing at the end, called ‘How it ends.’ It’s a really hard song vocally and emotionally. It was a really big challenge to figure out how to act and emote that song,” Joshua Dejarlais (12) said.

Even with the pressure of a first performance, many believe if they could go back, they would barley change anything or nothing at all. Instead they think about the good that will help them in the future.

“[If I could go back to the first performance,] I wouldn’t change anything. We keep improving. From temp week to now, it’s only gotten better, and I think I would change anything because of that. I enjoy the process of feeling like we get better every night. So I think it’s important that the first performance was fantastic but not as good as it could be because we just then keep getting better,” Laila Wenrich (12) said.

The last two performances will be Friday, March 16 and Saturday, March 17. The show starts at 7.