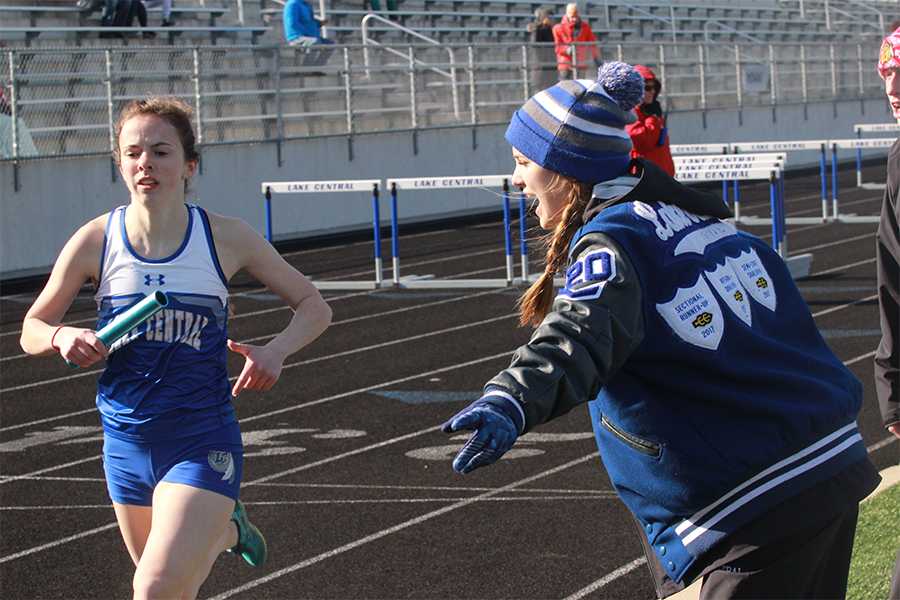 A teammate encourages Samantha Dittrich (12) during the 3200 meter relay. Lake Central placed second in the relay.

Girls varsity track defeated both Portage and Merrillville 86-46 despite windy weather conditions on Tuesday, April 17. Throughout the season, the girls practiced in snow and colder temperatures to prepare for colder meets.

“[The weather] can [hold you back] a little bit, but we just aim to fight through it because the wind was really bad. We have definitely had some meets cancelled because of the weather. When we have meets like this we are more prepared,” Samantha Dittrich (12) said.

With Coach Ronald Frederick, English, taking some time off due to medical issues, the girls noticed a slight change in the atmosphere of recent meets.

“I have only had two indoor meets with him there and those are really chaotic, but I do not know what it is like for outdoor. The only difference that I noticed was his presence at the meets because he is not that loud of a shouter he prefers quiet encouragement,” Liliana Zubeck (10) said.

A highlight of the night was when Makeda Ellis (11) shot over 40 in shotput, being one of the only two people in Lake Central history to throw over 40 feet.

“I did pretty well, I PRd today, so I am proud about that. I was three and a half inches from breaking the [school] record today, but I didn’t. As a team I think we did really well,” Ellis said.

Team manager, Meghan Long (11) learned that there is more to track and field other than her personal events.