Lights Out on Highland 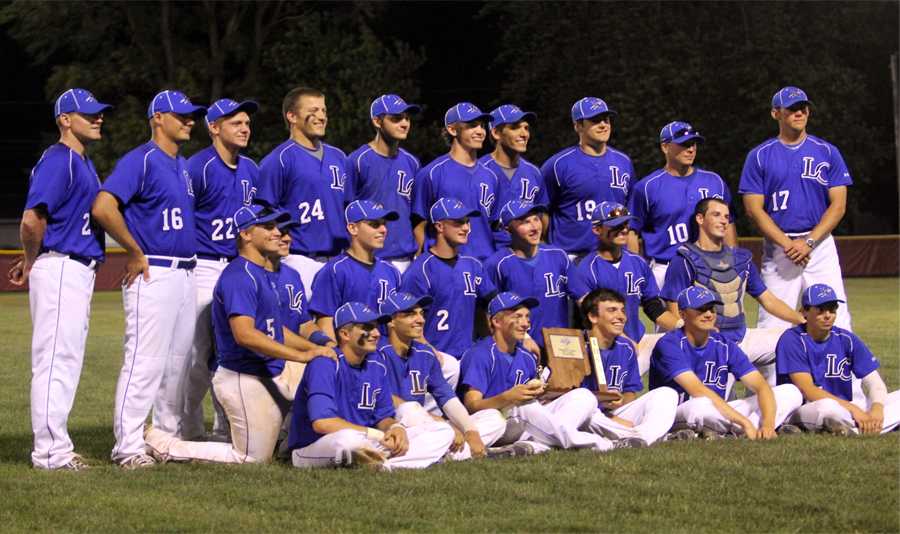 Lake Central, which won its second consecutive sectional title and 15th overall, advanced to the LaPorte Regional this Saturday.

Before he went to bat, Ryan Pachowicz (12) emphasized that he did not want the continuously failing stadium lights to go out again while he was at bat.
First pitch goes by, the lights go off. The second pitch comes by, and it is a home run for Pachowicz.
“I was pretty mad because the lights were out for my last at bat. I got frustrated about it happening again, but I found a pitch low and inside and hit it good,” Pachowicz said.
The lack of direct lighting above home plate did not stop him. With the lights going on and off all game, the team conquered Highland in the Sectional Championship by a shutout score of 7-0.
“It feels good. That’s all I know- it feels great. It’s going to be a good week at practice. We’re going to go into this weekend with confidence and hopefully win a regional title,” Taylor Lehnert (12), pitcher, said.
This was the third game the Boys played over their Memorial Day weekend after defeating  Munster on Friday night and Lowell earlier Sunday. Twenty one innings of baseball in 85 degree weather or higher was the weekend for the Indians
“Today was especially hard, [but] it’s worth it,” Zachary Mantel (12) said.
It has been worth it for many of the seniors, and they are going to continue to make it worth everything through the postseason.
“Most of us guys have been playing together since we were four. This is our last summer playing together so we have to make it worth it. From now on, every game could be our last game together, and I’m going to cry like a baby when it comes,” McNamara said.
Fighting through extreme heat with skill and plenty of “heard you dids” and “boogaroos” from the players, a coach cannot ignore the hard work and acknowledge the amount of value this game contained.
“This is a great group of seniors and underclassmen,” Coach Jeff Sandor said. “They deserve nothing less than a Sectional Championship, and they earned it.”
The Boys will continue their battle through the postseason when they start Regionals in LaPorte on Saturday, June 2. LC has won its second consecutive sectional title and 15th overall.