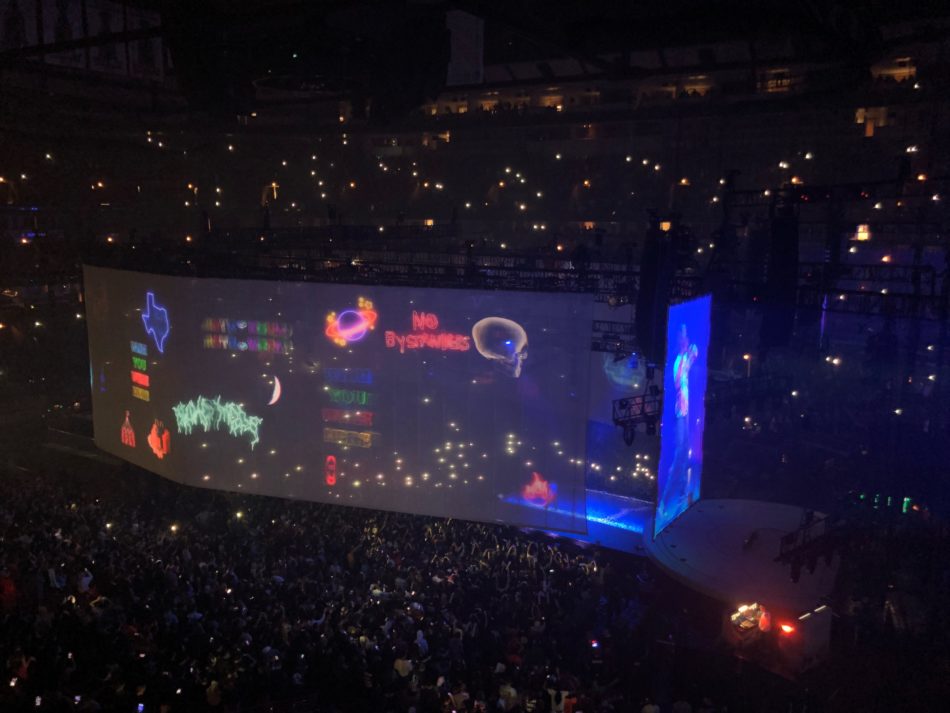 During the concert, a screen is lowered to show different images and visual aids as Travis Scott raps the song "HOUSTONFORNICATION".

On Thursday, Dec. 6, Travis Scott performed at United Center with Gunna and Sheck Wes as opening acts. The Astroworld Tour is named after his third album, Astroworld, which was released earlier this year. I went to the Astroworld Tour with Annika Gorney (10).

When walking into the doors of United Center, music played and lights flashed as balloons fell from the ceiling onto the floor. Fans were taking pictures against the aesthetically pleasing lighting, as well as stomping on the balloons that had fallen to the ground. I thought this was a fun idea to keep the fans occupied while waiting for the concert to start.

Travis Scott had a lot of merchandise to choose from, from t-shirts and hoodies to tour jackets and hats. I got a black tie-dyed t-shirt, which I thought had a cool design on the back. Although the prices were very high for the shirt, I thought it was worth it.

When walking into the arena to find our seats, we could see the stage set up. There were two different stages set up, one in the front of the arena and another set up in the back. There was a roller coaster track hanging from the ceiling which connected the two stages together. On the smaller stage was another circular track set up for fans to ride while Travis was on stage singing. I thought the stage set up was very aesthetically pleasing and it was clear that there was a lot of effort put into the design of it. I also liked the different props that Travis used during his performance, including the lighting, screens and roller coasters.

After the openers finished performing, Travis Scott came out on the smaller stage in the back. There was a lot of flashing lights and fire as he rapped. I thought the special effects were extremely intense, and they got the crowd very excited for the performance. After performing a couple of songs, he transferred onto the main stage, which was closer to our seats.

I thought that Travis Scott performed very well, and he sang all of my favorite songs by him, including “Sicko Mode” and “No Bystanders”. His performance had so much energy, and it kept everyone in the crowd very entertained for the whole entire time he was on stage. His stage presence was amazing and he interacted with his fans a lot, and he even let them ride the rollercoaster while he was singing “Stargazing”.

After the concert, I realized that Travis Scott is an even more amazing performer than I thought before. I would like to go see him in concert again, and next time I would get seats closer to the stage, because his performance is worth it. Overall, this concert was an amazing experience and I am glad that I was able to go and see him rap.