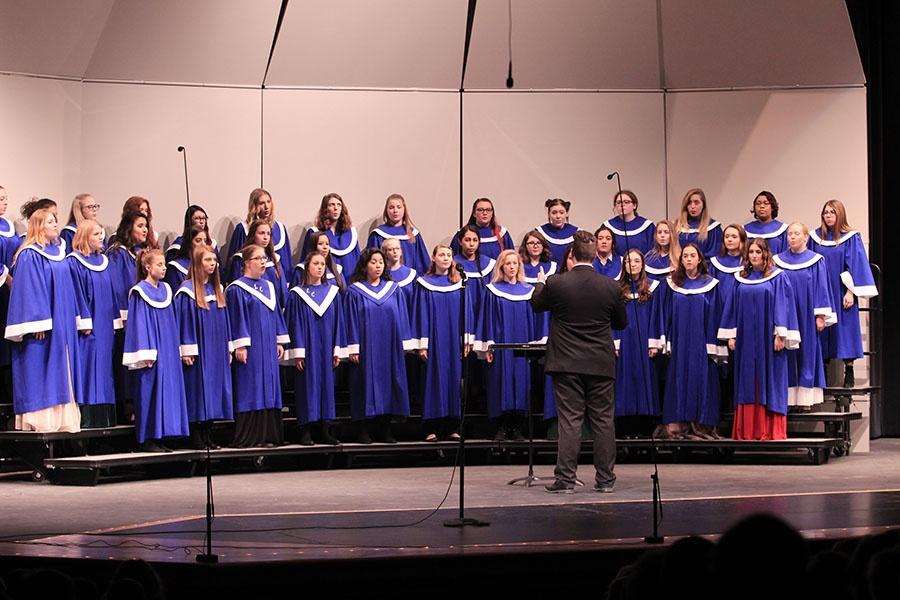 On Dec. 10th, the choirs and bells came together to put on their holiday concert. The concert featured many different holiday songs.

“Jolly Jingle was awesome. It was a mash up of Christmas songs and we got to have a lot of fun with it, which I did,” Kenny Stone (12) said.

The concert included performances by the Counterpoints, DaCapo, Trebleaires, Junior Treble, Varsity Choir, Concert Choir, Senior Treble, and Hand Bells I and II. Each choir featured many soloists who sang their hearts out for the audience.

“I think the concert went great especially for the show choirs [Counterpoints, Trebleaires, and Da Capo] because we sang all our songs at our caroling events and were able to practice a lot more that way. For class choirs, I think it went just as great because we brought the energy needed for the upbeat pieces, especially concert choir because we were the last set and a lot of us were really tired from our other groups,” Kelley Williams (11) said.

The choirs and bells have been preparing months in advance for this concert and had to practice many times to learn the music.

“I prepared by going over the words to every song so I knew them fully and completely,” Gilomar Feliciano (10) said.

For many students, the concert was a fun experience. Many people made great memories at the concert.

“I mean, aside from performing with everyone,[my favorite part was] probably being with all of my friends, getting ready, laughing before and during [the concert],” Sebastiano Matthews (12) said.

As we near the end of this semester, some choir members are finding that their experience, not only during this concert, but in choir as a whole, has changed them.

“Choir has really opened me up, especially the friends I have when I joined Da Capo, it’s being with them and knowing we all have each other’s backs that makes it great,” Matthews said.