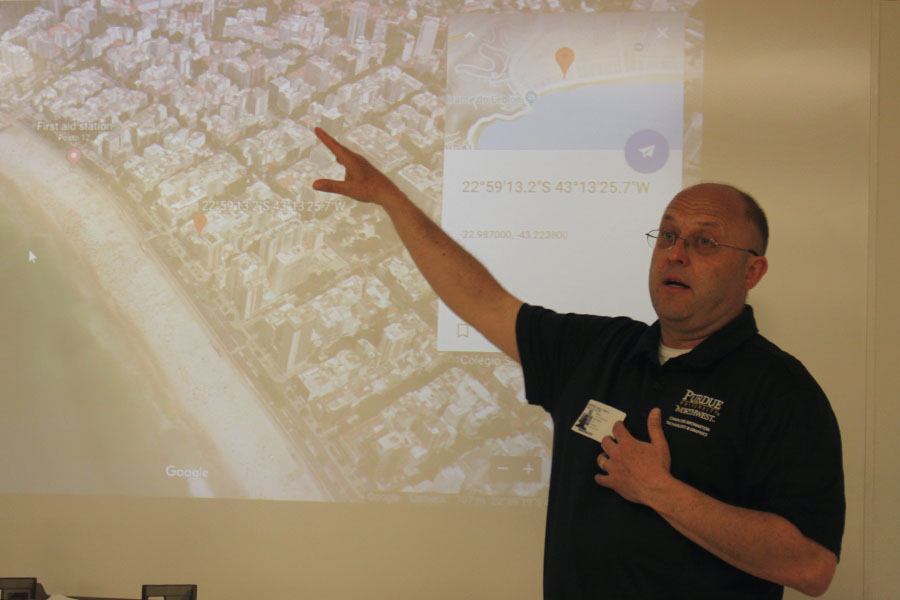 Ronald De Castro points to his old home town. De Castro spent a lot of his time in Brazil surfing in a local beach.

On Wednesday, May 8, International Club held a meeting. During this gathering, Ronald Charles Rabello De Castro -a visiting instructor at Purdue University Northwest- talked about his life growing up in Brazil. Raised in Rio De Janeiro, it was to no surprise that De Castro was met with immense culture shock when he came to the United States in the ‘90s.

“It started when I first got off the plane, I lived in Robertsdale in the Whiting, Hammond area. When I came from the airport my mom asked if I was hungry. The food in Brazil is different, so I didn’t know what to order,” De Castro said.

Coming from a different country, the food was something to get used to. Here in United States, the majority of our food is heavily processed and high in sugar. De Castro was astounded with the French “dressing” he was brought to eat with his salad. Spitting out the salad, he couldn’t help but wonder if a mistake had been made and they accidentally put sugar into the so called dressing. Although the food was seemingly one of the most different things, De Castro also found that the culture was a lot different.

“College was different, it’s a sad thing to mention. I did not know really what racism was until I got to this country. I started going to school at Calumet College and went there for free because my mom worked there but I didn’t have the degree that I really wanted to pursue. My goal was to come here for agriculture and then go back and take care of my grandfather’s farm. I learned really fast how [the culture] was here because when I went to IUN [people] usually stuck with their own race. I came here during the early ‘90s and I sat in the wrong place and got the nastiest looks ever. Luckily there was a Brazilian in the group, who knew that I was from Brazil and he explained to the group [the situation] and afterwards I was welcomed. I did not know I was considered ‘white,’” De Castro said.

In a 2010 census, Brazil’s population has been shown to have shifted from whites being the majority to blacks and mixed races now being the majority. Like many countries, Brazil is no stranger to the struggles of racism but De Castro, being of lighter skin tone, never experienced the social separation of race as it was in the United States.

“If I was not married or [didn’t] have kids, I would probably be back in Brazil right now, even though the economy [and] the corruption [are terrible]. I had an interesting life, but I wouldn’t change it for anything,” De Castro said.