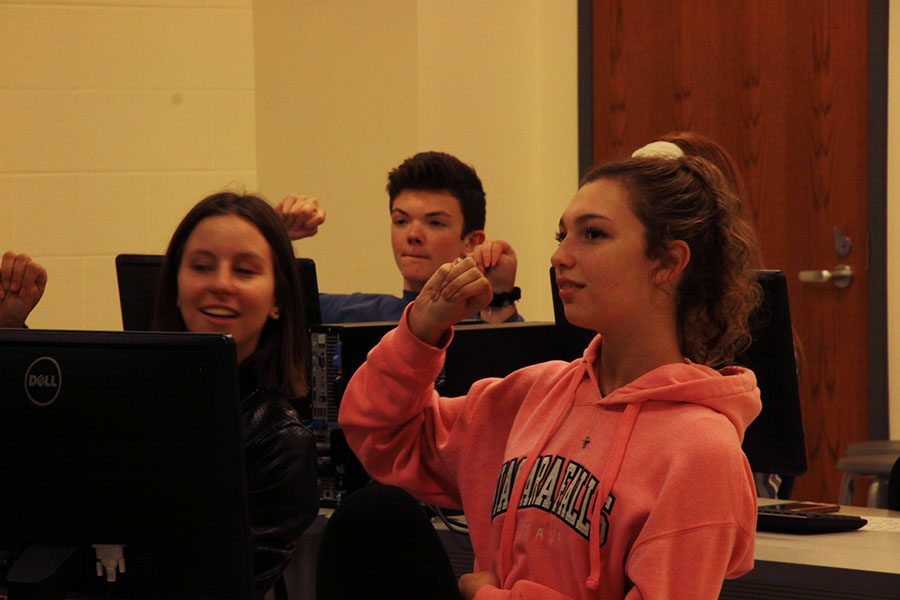 Anastasia Zervos (12) pays attention while trying to learn the alphabet. The club members learned the alphabet quickly and even signed their names.

Learning a new language is always a fun time when you’re interested in the topic and have friends to make it even better. On Wednesday, Sep. 4, club leader Delanie Flynn (12) held the first American Sign Language (ASL) meeting.

“I took a couple ASL classes over the summer and I think it’s cool to be able to speak to people with disabilities and people who can’t hear. Since I already spend time with kids with disabilities, I thought it would be cool to communicate because some of them don’t talk.” Delanie Flynn (12) said.

The ASL club was founded by Taylor Robinson (‘19) last year. When Robinson graduated, Flynn took over the club and, hopefully, will pass it down to someone else next year.

“Last year, Taylor Robinson started the club and I was in it. There were only two other people in it with me. I texted her over the summer and asked her if I could take over the club this year. I think it’s important to be able to learn sign language because not a lot of people know it. For disabilities and people who are deaf, it is pretty cool to still be able to communicate with them when a lot of people can’t.” Flynn said.

Students from all grades came down to participate in the club and are excited for the next meeting. The next meeting will be on Wednesday, Sep. 18. Clear your calendars and come learn!