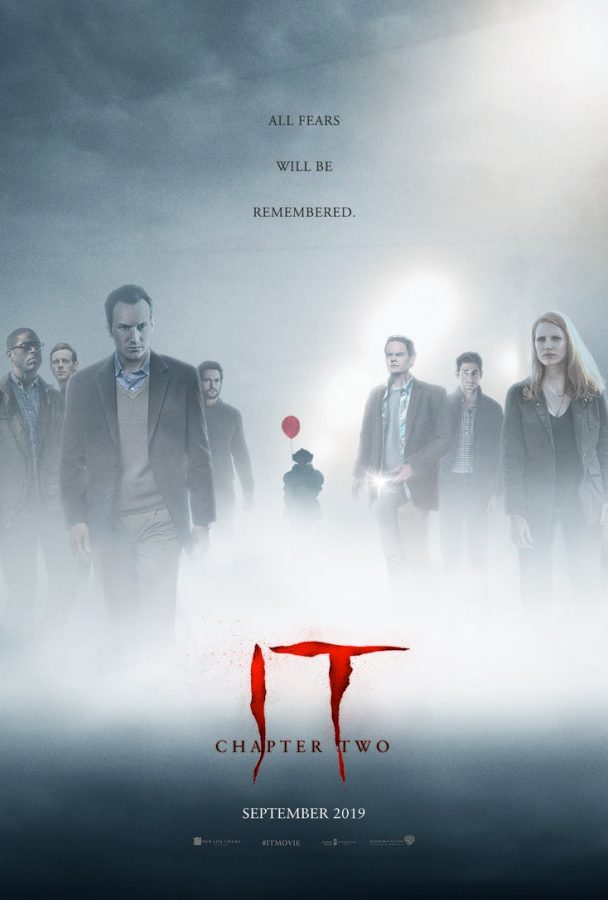 Do you like scary movies? Are you afraid of clowns, jump scares and enjoy a movie with a decent amount of gore? Then prepare yourself for the sequel to Stephen King’s hair raising novel, “It Chapter II”.  The movie opens up with the “losers” who are now reuniting as adults to piece together the parts of their lives that they have fought so hard to forget. After a phone call from a long lost friend, Mike, who delivered the terrifying news that an evil creature named Pennywise the Dancing Clown, has returned to their hometown of Derry, Maine, and claimed another life twenty seven years after the group of friends banned together to rid the town of his terror.

As the group came together to once again attempt to rid the town of the murderous clown, they also re-lived some of the more pleasant days of their childhood. Some crushes went unseen while others were left still wondering what could have been. A bond of strength and encouragement from within their tight little group and of sadness and despair arose as they said goodbye to loved ones who had been lost along the way. Now once again, this group of “losers” is forced to come face to face with the very thing that they feared most, and it will take every bit of the same bond to band together and remove evil from this town forever.

The “losers” came together to try to stop Pennywise from taking anymore lives, but sadly they were unsuccessful. Bill Denbrough tried his best to save a little boy, who was around the same age of Georgie,Bill’s brother, who had fallen victim to the evil clown in the first movie. However, despite all efforts, Bill was unable to save him, as the clown had killed the young child right in front of him. That was the breaking point for Bill. He knew that he had to stop this clown from taking the lives of more innocent people.The group had come together to the very house where they defeated the clown for the first time. They knew it was up to them to rid the town of the clown’s terror once and for all. One by one they faced their fears and used them against Pennywise. Once they had weakened him they were finally able to remove this nightmare from their lives …or did they?

This movie will leave you on the edge of your seat. I personally thought this movie was a decent scare. Though it seemed to drag on in some parts, it was necessary to complete the story line. However, I would recommend this movie to others.