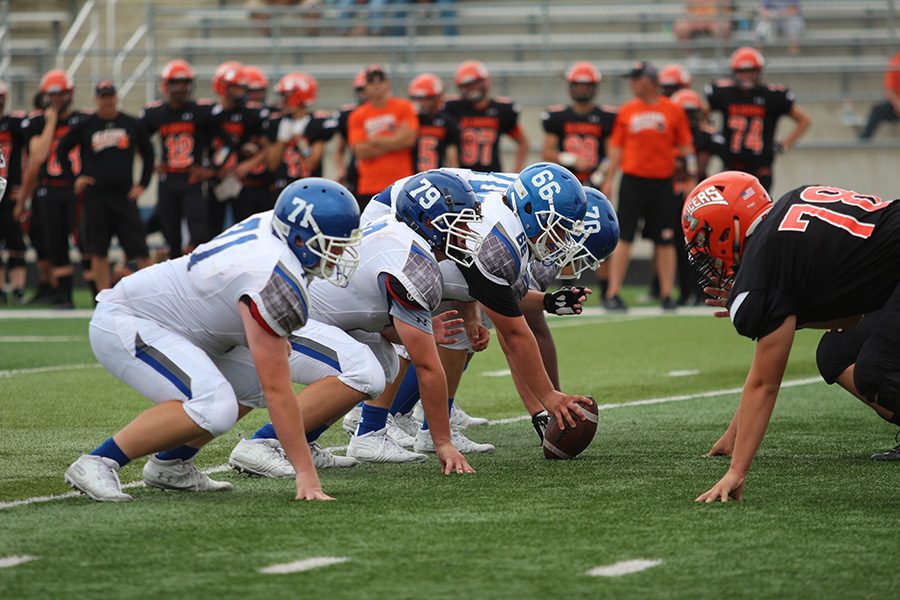 Christian Jones (11) waits to snap the ball to gain yards for the play. The offensive line is one of the most important elements of the team, guarding the quarterback from getting sacked.

On Saturday, Sept. 21, the JV football team faced off against the LaPorte Slicers at home. After losing against Crown Point the previous week, the boys won 17-7.

“It motivated me to be ready for Michigan City, knowing how I ran against Laporte it helps me get a mindset to do the same thing against our next opponent,” Bennett Bacso (11) said.

The team was strong offensively and defensively, which helped them come back after the previous loss.

“I think both sides of the team offense and defense contributed to winning against Laporte. Naturally I would say the JV players already have good chemistry. We never fight and we always pick each other up, due to this natural chemistry, it helps each side of the ball play better,” Bacso said.

After coming out on top against LaPorte, hopes run high for Bacso regarding the team’s next rivals: The Michigan City Wolves.

“My hopes for the next game is to run hard against Michigan City. City is known for being a good team. But I know we have the skills and the heart to beat them. All it takes is positivity, hard-work and execution,” Bacso said.

The next JV game will be Saturday, Sept. 28. Be sure to come out and support the boys as they face off against the Michigan City Wolves in Michigan City.