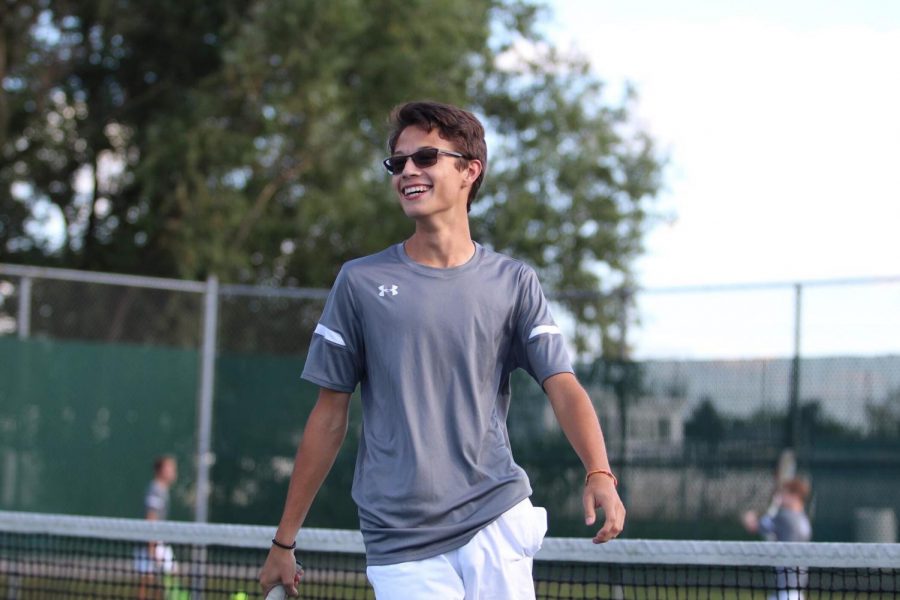 Luis Martinez (11) smiles back at his doubles partner after winning the point against his opponent. Martinez also won his match against Hanover.

On Sept. 23, the boys tennis team played a competitive match against Hanover. Due to the fact that Hanover is one of their biggest rivals, this match kept the players on their feet.

“Our team has done really well so far this season, we’ve had some tough opponents, but we’ve always pulled through,” Kyle Kennedy (10) said.

The boys team may have some competition, but they’re able to come back from their losses and win in the end. The boys started their match strong, with every varsity player in the lead.

“Hanover is pretty solid, they are undefeated, but I’m hoping if we play well and get a little momentum, we will win. Coming back when we’re down a set is my team’s biggest strength this year,” Head Coach Ralph Holden said.

Although it was an intense match, the boys were able to keep the momentum going as the match went on. The boys team is 6-8 in their season, being 3-3 in their conference matches. The team has done extremely well this season, and has even been able to win against other major rivals.

“I love how my team is able to come together and help each other out in order to win,” Kyle Kennedy (10) said.

At the end of the match, the boys team won against Hanover with an overall score of 5-0.  Congratulations to the boys for winning yet another match, and good luck to them as they continue to fight throughout the rest of the season.