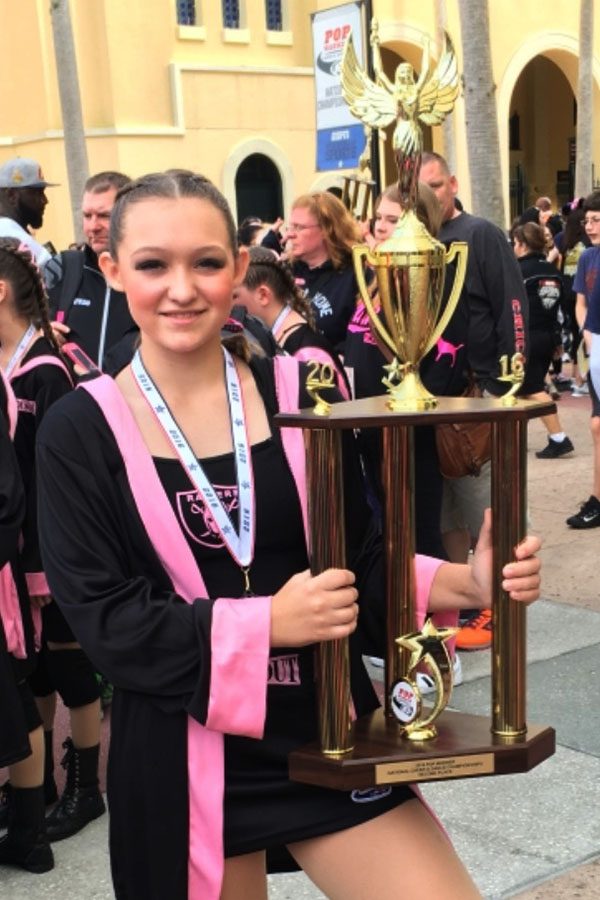 Q: When did you get started in Tri Town Raiders?

A: “I was going to a different studio and they had a competition team there but my parents didn’t want to do. So my parents started looking other places and we found Tri-Town through them and we tried it out and I loved it.”

Q: How old were you when you started Tri-Town?

Q: How old were you when you started dance?

Q: How long have you been dancing with Tri Town? At Patty’s?

Q: How did you get involved with teaching and coaching? Which one did you get started in first?

A: “Actually, I don’t know. It was about the same time because I aged out of my team’s group for Tri Town. Instead of competing, my coach had me helping with them so coaching. And that was around the same time, I started teaching because almost everyone who takes classes there wants to work there too and they pay really really well. So I kind of always knew I wanted to work there. I just got to the right age and turned everything in.”

Q: What do you do when you are teaching and coaching?

A: “Teaching is I get a schedule of which days I work and I just control those classes. So like there’s usually two of us in the room and since I am younger I am usually like the secondary person. So I just kind of help keep the kids under control and demonstrate for them. Since a couple of the teachers are a little older. So they can say what to do and I do it and they follow. And coaching is kinda the same thing. Except you just have to keep drilling the competition routine.”

Q: Do help show the kids the routine when they are learning?

A: “Yeah. For Patty’s yeah a lot. That’s basically what I do. And then I also kinda teach the dances cause some dances occur on two different days so I have to remember what the dance is to help teach them.”

Q: What do you enjoy most about both?

A: “I really just like dancing. It’s really fun for me. I guess it’s like my stress reliever because I do it so much and that’s where I can just release anything.”

Q: How much longer do you think you are going to stick with them?

A: “Tri Town. I think this is the last year for it cause my coach is moving on to something else and so is her daughter who is also coaching us because her daughter is a Cincinati Bengles Cheerleader. And her mother is running for town council. I think so Tri Town is gone. It’s ending. Patty’s. I don’t know how long I will work there. I can only take classes there until I’m 18 but if I go to college here I think I can stay working there as long as I need.”

Q: What is something that you learned about teaching and coaching that you are going to take with you for the rest of your life?

A: “Kind of how to appease to kids cause if they’re younger, you have to understand their mindset. They wanna have fun. They wanna play games. So you can’t like yell at them, you have to just reason with them in the way that they like. And then older kids you just have to do the same thing but they’re more like they wanna understand what they are doing and want to see you as an equal instead of like a coach or something. So you got to get down on their level like that.”

Q: Do you think that you are going to want to work with kids when you get older?

A: “Probably not. I am not the greatest with kids. I can work with them now because I have been doing it for a while but probably not..”

Q: What skills have learned from dance that you implement into your daily life?

A: “I think I express myself more because you have to know how to express your emotions with certain songs. So I can do that. And just basically just holding myself certain ways like your body. I guess cause you are taught not to be clumsy or flexed or anything like that. I have had that drilled into me and now I hate when I see someone with a flexed or sickled foot. That has definitely stuck with me.”

Q: Where do you think you would be without dancing? What would you be doing?

A: “I used to play soccer and I might still be with that. And I probably could have gone into football if I wanted to do that. I might have done gymnastics or cheer. I don’t really know.”

Q: What are your plans in the future for dancing?

Q: Do you think you are going to revisit dance in the future?

Q: Would you ever think about opening your own studio or working at one?

Q: Would you ever do anything with Pop Warner?

A: “It is kinda of over. If it kept going, I feel like I could have but since it’s ending. I am kinda of like on my way out too.”

Q: Would you revisit Pop Warner as well and coach?

A: “Coaching probably not; that’s like a lot. There’s a lot to do with that. And it’s a lot. There’s specific rules for that too since it’s competition so you have to follow all of those.”