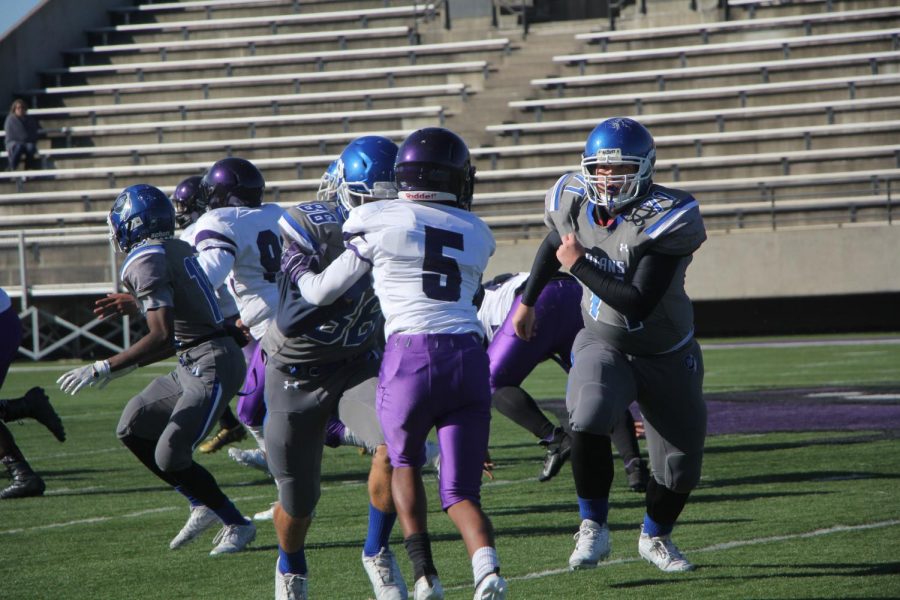 Linebacker Mel Hay (10) attempts to block a Pirate’s defensive player, with only a few seconds left of the quarter. This however was unsuccessful, the player pushed past him.

The JV football team faced off against Merrillville High School, this Saturday, Oct. 12. The boys won the game with a score of 7-0. The JV team went into the game determined to win and motivation hungry.

“I did think we were going to win the game simply based on the attitude the guys had in the locker room. Going into the game, you just saw a determined face on everybody to win and get back at Merrillville,” Tyler Wellman (10) said.

Merrillville tried their best on the field to play through the chilly weather and to beat the JV team even if they didn’t really want to be there.

“I thought we were going to win the game because I didn’t think the other team wanted to be there, I mean it was cold and we were just more ready to play. The other team tried really hard and they did a good job, but we ended up coming out with the W,” David Salinas (11) said.

The team had to build a bond over the season in order to dominate the fields. They have to make sure they can rely on their team members to do their jobs to execute their play successfully.

“My team is my family, I’m with them all the time. Practice is amazing around them. If I were to mess up or if someone else were to mess up, we pick each other up or fix it, we don’t knock each other down for the mistake we made. My bond with my teammates [is like] a family because I am always with them and we are so close it’s like I know everything about my friends,” Aaron Mikolajcyk (10) said.

The bond the team has with one another is very strong. To them, they are like one big family. They do their best to cheer one another up, and they encourage each other to try their best on the field. As time goes on, their bond will only get stronger.

“My bond with the team is very strong; ever since the beginning it just seemed that everyone clicked with each other, which is a reason why I think this team has had so much success this year. Our bond with each other will only become stronger in the years to come. I also get this new family that will always have your back no matter what and they know I always have theirs,” Wellman said.

Now there is a week left of the season. The boys will only be able to reflect on what they need to improve to make themselves and their team even better than before.

“Plan for next season is to grind hard during the offseason, so by the time the next season starts, I’ll be continuing in stride and not starting all over from the start. I think this team can do some really good things in the upcoming years if everyone sticks with the  great things we have going on,” Wellman said.

Some team members want to improve on things personally, so they can fix any flaws they may have had this season.This will only better them for the next season.

“For next season I plan on being much bigger and stronger so I can dominate on the field. I want to improve everyday and I will work towards that goal.” Mikolajcyk said.